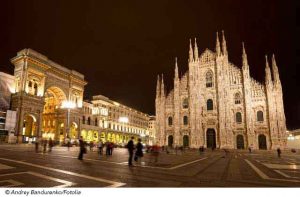 Milan’s historic centre is contained within a relatively small area which is now mostly closed to traffic, meaning that it’s easy to explore on foot. This area is home to myriad shops, including big-name fashion brands, historic ‘botteghe’ and some of the city’s most sought-after cafés, bars and eateries. In the space of just a few kilometers you’ll find the Duomo, the Galleria, Teatro alla Scala, the Castle, the ancient Basilica di Sant’Ambrogio, as well as sporadic traces of ‘Roman Milan’, which was the first settlement and the predecessor of present-day Milan. For the ultimate one-stop shopping experience look no further than the Rinascente flagship store (under the arcades): an amazing array of fashion items under just one roof!