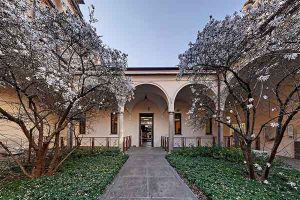 The best place to start your tour is the Civic Archaeological Museum of Milan, housed in the former convent of San Maurizio al Monastero Maggiore. If you want to discover what Mediolanum looked like in the 1st century AD, you’ll find scale models, information panels and an extensive collection of artifacts here. The Museum also provides visitors with information regarding the habits and customs of the ancient Romans, through reconstructions and educational areas. The itinerary consists of several sections: Greek, Etruscan, Roman, Barbarian and Gandhara. 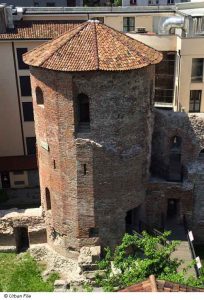 As shown by the excavations, this was the heart of Mediolanum. In days gone by, the area housed a Roman villa dating back to the 1st century, the Maximian walls and the Roman circus. In the courtyard of the museum, you can still see the bell tower of the church of San Maurizio. This was originally a 14-metre tower, from which the chariots used to race in the circus.
Corso Magenta, 15.
M1-M2 Cadorna, M1 Cordusio
www.museoarcheologicomilano.it