Since 1978, thanks to Mister The Lian Tjo, known for masterfully balancing music and flavours, colours and aromas, the Hong Kong restaurant has been offering diners an authentic taste of Chinese cuisine, in a truly evocative atmosphere.
The restaurant is distinguished by the authenticity and sophistication of its cuisine, a skilful meld of the delicate flavours of Cantonese culinary art and the more decisive flavours of Western China, but also a number of delicacies from the Beijing area and the whole of Northern China, prepared in keeping with time-honoured recipes.
Throughout history, Chinese notables have considered food and, above all, the way it is cooked, served and then eaten, an important cultural element, therefore according it all the necessary passion and skill. Firmly anchored to the traditions of its country, each and every dish prepared at the Hong Kong restaurant is executed with painstaking attention to detail, concentration and professionalism.
Confucius said that “There is no body but eats and drinks. But they are few who can distinguish flavours.” For this reason, Hong Kong prides itself on preparing each dish just before it is eaten, asking its clientele to abandon the frenetic pace of modern society in order to respect and savour the meal by dedicating it the time that it justly deserves. Its menu is widespread and varied. You can start your meal with a simple spring roll, before choosing between main meal options that include delicious shi jin chao mian (noodles delicately flavoured with eight aromas) and zhì jì (chicken with lychees), finally ending on a high note with the restaurant’s delectable sweet tou sa quo pin (a crêpe spread with soy jam), discovering in each dish the same quality, sophistication and authenticity for which traditional Chinese recipes are renowned. 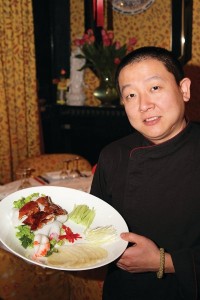 The guru of the sought-after cuisine served by the Hong Kong restaurant is chef Zhang Xiao Ming (see photo). He began his meteoric rise to fame in 1995 when, as a very young man, he won a competition organized by Patron Tjo who was looking for a starred talent to helm his restaurant. Since then, they have continued to work together, regularly enriching and enhancing the menu with new flavours and specialities.