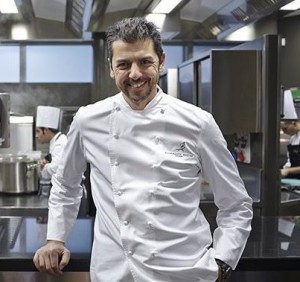 “Whenever I passed in front of the building site of Porta Nuova Varesine, I thought to myself: this is where my restaurant will be headquartered.” Hence, Andrea Berton chose the futuristic Porta Nuova district: a contemporary, centrally-located glass tower complex that reflects his elegant, minimalist cuisine. The menu changes according to the availability of ingredients and in addition to the traditional ‘carte’, Berton serves a ‘lunch’ menu that panders to diners in search of quick, attentive service and high-quality food. The jewel in the crown at this restaurant is its ‘Chef’s table’ where guests get a front-row view of the action in the open kitchen (Viale della Liberazione, 13. T: +39 02 67075801 www.ristoranteberton.com). 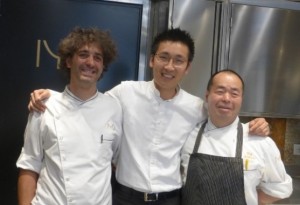 A reference point for Oriental cuisine in Milan, Iyo owes its fame to its outstanding kitchen staff, helmed by maestro Haruo Ichikawa, chef Lorenzo Lavezzari and owner Claudio Liu (see photo). This auspicious creative partnership is the underlying basis of Iyo’s originality and its offerings: sublime, deliciously flavoured dishes exit its spectacular open kitchen to reveal an imposing robatayaki that allows food to be cooked on a tiered grill. Their fish division turns out delicious raw fish platters: timeless classics mingle with more innovative delicacies, a blend of oriental flavours and the best Italian ingredients, to give life to a one-of-a-kind culinary experience (via Piero della Francesca, 74. www.iyo.it).