Not far from Milan you can find many small cities located in the hills, which represent a good example of the cultural and environmental heritage of Northern Italy. It’s the case of Castiglione Olona, 40 km from Milan, a small city located between two lakes: Lake Maggiore and Lake Como. Its historical roots date back to the Fifteenth century, at the beginning of the Renaissance, a period characterised by local fights between the most powerful families in the area. Traces of the art during the Renaissance can be found everywhere; courtyards and stones, red bricks and sculptures remind visitors of this period, while paintings dating back to the Fifteenth and to the Sixteenth century are easy to spot while wandering through the city centre. 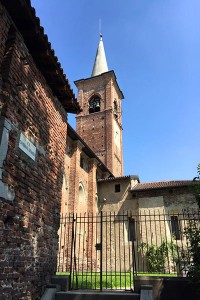 Although few people know about this small city, visitors reaching Castiglione Olona might be surprised by the variety of entertainment offered; in fact, those interested in ‘Palios’ won’t be deceived as Castiglione Olona’s Palio dei Castelli is among the most renowed palios in Italy after the ones in Siena and Asti. This characteristic competition is held every year around the second week of July and includes many shows, from parades in traditional costumes to an everchanging historical drama held in the central square. Not to mention the famous barrel race, the core of the celebration, performed running through the city’s eight districts and surrounded by the sound of trumpets and drums. But it’s not all about the Palio; the surrounding environment and the antique markets, held every first Sunday of the month in the city centre, are two gems that make Castiglione Olona worth a visit.
[Photo credits: Luca Terzaroli, CC 2.0 license and Andrea Jarach]

Facebook
Twitter
Pinterest
WhatsApp
Previous articleNow You Can Get Your Personalized Burberry Scarf, with the Scarf Bar
Next articleStarred Chef Matias Perdomo's Ristorante Contraste Open in the Navigli District