ATM has planned a list of improvements to public transports, in order to deliver to the city’s future visitors, and to locals, world-class transport links. Milan is going to be the best connected city of the country, for Expo 2015 and beyond.

Another part of the new purple line M5 will be working by the end of April 2015, and it will link the San Siro Stadium with the metro stations San Siro Ippodromo, Segesta, Lotto and Portello.
The Lotto station is likely to become a busy hub during Expo 2015, as it intersects with red line M1, the one already connecting the city centre to the Expo site (Rho metro station).
The part of the M5 connecting Garibaldi FS station to Bignami (area of Bicocca University) is already working. 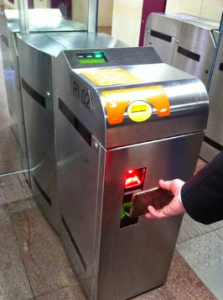 Owners of smartphones can buy their ticket for pubic transport through their mobile phone. The new service is only available for Italian mobile providers: Tim, Vodafone, Wind, and H3G. Users will receive a QR code for the validation in the metro stations (right-photo, credits: Urbanfile).

Simply text “ATM” to 48444 and receive ticket information and validation, price (cost of ticket + cost of 1 SMS, the latter depending on the contract between user and provider) will be charged directly to phone provider.
In alternative, it is possible to download the app ATM Milano, from iTunes or from Google Play.

Dear Readers,
even in November, The Welcome Magazine Milan has decided to keep providing you with all the necessary information on the city, hoping that we’ll be able to meet you again as soon as possible.