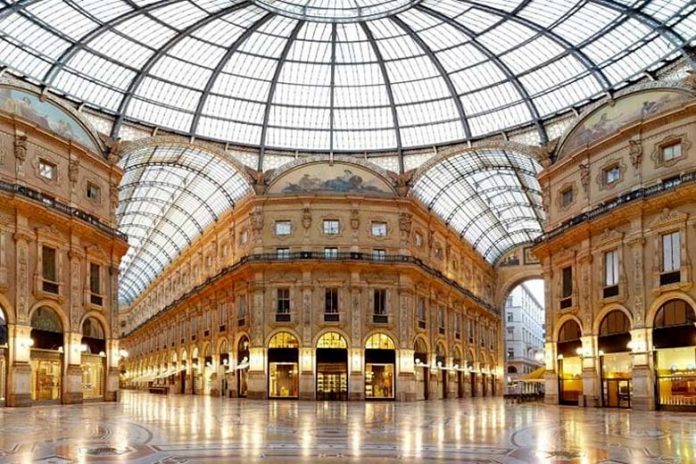 Situated in the centre of Milan, the Galleria Vittorio Emanuele II is an extraordinary feat of architecture, an emblem of Milanese identity featuring a meld of beauty, art and luxury under an amazing glass roof.
To celebrate the Unification of Italy, between 1865 and 1867, based on a project by architect Giuseppe Mengoni, Milan built the Galleria Vittorio Emanuele II, named after the first king of Italy. The architectural work of this stunning arcade, which serves as a passageway between piazza del Duomo and piazza della Scala, boasts a blaze of marble, stuccoes and mosaics and is dominated by an amazing iron and glass dome standing fifty metres high. Its centre – the socalled “Ottagono” – is surmounted by imposing mosaics representing different parts of the world (Africa, America, Asia and Europe) to celebrate the centrality of the city in the world’s global economic and cultural system. One of the oldest trade centres in the world, from the time that it was built the Galleria became a city favourite for evening strolls, a place of demonstrations and a meeting point for the Milanese bourgeoisie, artists, academics and musicians, including Giuseppe Verdi and the Futurists. An integral part of the pulsating heart of the city for almost 150 years, it is a monument, a covered arcade and home to exclusive shops and restaurants. Following its inauguration, dozens of elegant shops opened under its vaults. So much more than a shopping arcade, it exudes an air of luxury and is lined with boutiques, a seven-star hotel, landmark restaurants and cafés, including Savini, Camparino and Biffi. In anticipation of Expo 2015, it is currently undergoing intense restoration works, in a bid to return it to its former glory.

CURIOSITY: the arching glass and cast iron roof, together with its iron structure, were originally manufactured in France.

Nearby Attractions and Info Points

Depending on the time of the day, in the Galleria you will either encounter hordes of tourists, hurried office workers, foreigners from all parts of the globe or the Milanese either on their way to the theatre or to one of the area’s numerous museums or nearby attractions, including: the Duomo, Teatro alla Scala, Gallerie d’Italia, Palazzo Reale, Grande Museo del Duomo and the Museo del ‘900.
Two key reference points designed to help tourists discover all that the city has to offer are InfoMilano and the Urban Center.

Tickets: regular tickets from 5 euro, reductions available.
Opening Hours: Tue-Sun 9 am – 5.30 pm. Closed on Monday.
If you are planning to visit this location on one of the following dates, we recommend you to check the availability: 1, 6 January, Easter Sunday and Easter Monday, 25 April, 1 May, 2 June, 15 August, 1 November, 8, 25, 26 and 31 December.