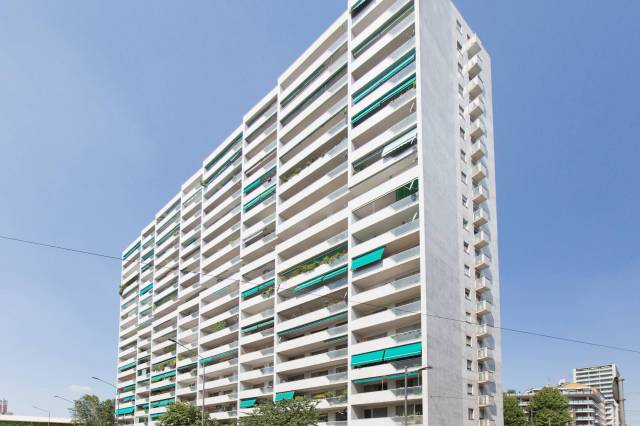 Milano has its own Unitè d’Habitation à la Marseillaise. It is not as impressive and grand like the one by Master Le Corbusier, but I would give it a serious though for a visit. So, if you are touring this part of the city, after a stroll to the Castle, the Arco della Pace, around the Sempione Parc, make a stop in Torre Branca for a quick lift up to Heaven, point your eyes to the North and get acquainted to this incredible building by Milanese rationalist architect Piero Bottoni. Can you imagine the powerful rebound this building must have had in provincial Italy soon after the war? Between 1953 and 1958 this project was inserted in the urban system of Milano, while the city was still on the way to reconstruction after the severe bombings of WW II. It looks to me, like an ocean liner skillfully moored in the middle of the city.

When one approaches the premises must admit that the perception of this structure reshapes rapidly. It is extraordinary! The groundfloor has a perfectly worked out relationship with Corso Sempione : viewed from the side walk ,this mighty and gigantic building seem to have no impact at all with the milieu. The transversal setting and the porched entrance hall cooperate in perfect harmony to make it feel long and lean. And what about the coloured tiles Bottoni chose to decotate the entire area ! At a deeper look, one can notice that the two facades are different, this is stylish ! The door man will be extremely welcoming, letting visitors gently walk on ground floor, only. Do visit in the morning when the sun illuniates the area warning up the coloured tiles. The building is in Corso Sempione 33, walkable distance from Arco della Pace.

Not just books The Biblioteca Braidense was commissioned by Maria Theresa of Austria in 1786 and has represented a place of cultural exchange for the...
Read more
Sightseeing

A new instrument for storytelling Brera Design District, one of the main protagonist of the yearly Fuorisalone event, has powered a new online project to...
Read more
Sightseeing

The current global health emergency has brought in a large number of innovations in the world of culture and sightseeing. For example, have you...
Read more