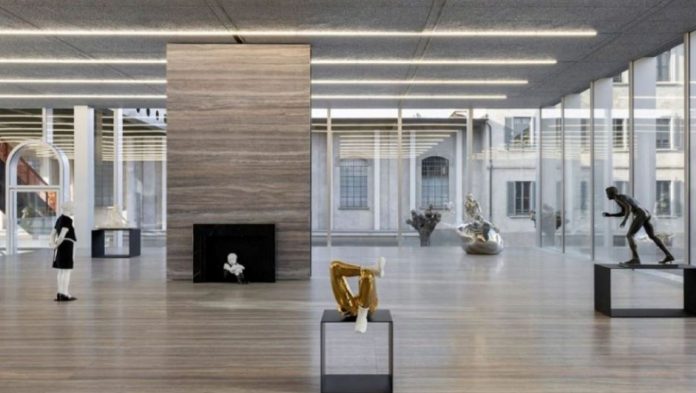 “Useless Bodies?” is an exhibition curated by Scandinavian artists Elmgreen & Dragset that examines the condition of the human body in the post-industrial era. The installation  stems from a reflection on the current meaning of man’s physical presence, particularly after the experience of the pandemic. Having passed the century of man as a “producer” of consumer goods, and the following century in which he became a “consumer“, today we can speak of the human being as a simple “object of data analysis” by big tech.
Following a route through four exhibition spaces within the two floors of the Podium, the North Gallery and the Cisterna, the public encounters a sequence of immersive installations.

Between contemporary statues and robot-dogs, environments inspired by the home of the future, not exactly cosy and mostly resembling a spaceship. The more than 3000 sq.m. of the Fondazione Prada have been set up for weeks as a sort of showroom where the visitor is an unwanted guest wandering around observing environments where the human presence is reduced to a very few inanimate and totally disturbing beings.

The project is hosted in the spaces of Fondazione Prada: Podium (1st and 2nd Floors), North Gallery and Cisterna.

Tickets are available online or at the Fondazione Prada’s ticket office.