Asola | Cucina Sartoriale is a new gourmet destination for lovers of haute cuisine on the ninth floor of The Brian&Barry Building.

Located in piazza San Babila, between via Durini and via Borgogna, in the heart of downtown Milan, “Asola | Cucina Sartoriale” dominates the beating heart of the Milanese metropolis from its prime position on the ninth floor of the building that Brian&Barry has dedicated to the celebration of excellence.
Asola is the temple of Chef Matteo Torretta who interprets gourmet Italian cuisine in a contemporary, international key with the same sartorial attention dedicated to a made-to-measure garment. The kitchen thus becomes an atelier where the chef, like a tailor, combines flavours and ingredients to give life to unique, exciting creations. A sartorial take on gastronomy, also apparent in the restaurant’s original, innovative architecture which makes Asola a one-of-akind location on the Milanese dining scene. From the large kitchen, strategically located in the centre of the dining room, the chef interacts with the diners who, seated around a large counter, are actually able to watch their dishes being prepared. For those in search of a more intimate atmosphere, the “San Babila” table, featuring a breathtaking view over the eponymous square, is the place to be. 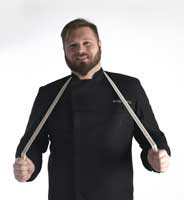 Acclaimed chef Matteo Torretta set out on his starred career path while still a young man, working alongside several of the world’s most revered chefs including the likes of Maestro Gualtiero Marchesi and Martin Berasategui but also Giancarlo Perbellini, Carlo Cracco and Antonino Cannavacciuolo. Following a period as Executive Chef at the prestigious Ristorante Savini, in 2011 he entered the kitchens of the “Al V Piano” restaurant of Milan’s Grand Hotel Visconti Palace where he remained until deciding to accept the new, exciting challenge as chef of the new Brian&Barry restaurant.
[wpgmza id=”43″]

Please note that this restaurant is closed until 3 April for the COVID-19 lockdown. An industrial soul with a Romagna heart Located just steps from Milan’s...
Read more
Dining

Edomae with a view A corner of Japan in Milan, where the traditional cuisine of Tokyo embraces contemporary influences, and typical oriental settings espouse the...
Read more