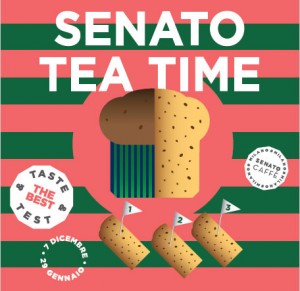 Let’s admit it, part of Milan’s flare is also associated with its delicious traditional sweet treats. To celebrate the local excellences such as Panettone – to mention but one – not just in the festive period, the highly central Senato Hotel Milano has launched a gluttonous ‘Senato tea-time’ ritual with panettone tastings. From 7 December 2016 to 29 January 2017, indeed, hotel guests, but not only, have the chance to taste exclusive panettone creations by three of the most sought-after pastry shops in town – Cova, Marchesi and Sant Ambroeus – accompanied by an accurate selection of teas or, why not, a cappuccino or a glass of Franciacorta bubbles served within the elegant spaces of Senato Caffè. The initiative, ranked among the not-to-be-missed events in January by Vanity Fair Italia, will be followed by always new tastings, starting from a delicious tea-time accompanied by chiacchiere (traditional sweet delicacies from Naples associated to carnival celebrations) or by hand-made colomba (the Italian name for Dove) for Easter, consisting in a soft dough filled with dried raisin, candied citrus fruit and almonds.
Now it’s up to the most sophisticated palates to choose which one will be the best Panettone in town!
Senato tea-time is available daily until 29 January and can be enjoyed without a reservation at a price of 14 euros, beverage à la carte excluded.
Senato Hotel Milano
Via Senato, 22
T: +39 02 781236
M3 (yellow line) Montenapoleone
External links: www.senatohotelmilano.it

In Milan, when it comes to Italian gastronomy, Peck sets the standard for the rest of the world. A success story for more than...
Read more
Dining

From footballer Danilo D’Ambrosio’s desire to “return to that magical convivial Sunday atmosphere, with menu and recipes to enable you to celebrate with the...
Read more

Dear Readers,
even in June, Where Milan has decided to keep providing you with all the necessary information on the city, hoping that we’ll be able to meet you again as soon as possible.