While in Milan, besides ogling the glittering window displays of designer boutiques, fashion lovers can also visit the numerous restaurants and venues owned by big name brands. Be it a quick business lunch, an aperitivo in the company of friends or a romantic dinner, Milan truly has lots to offer. Upscale Italian cuisine can, in fact, be found at numerous locations renowned for their style, elegance and originality. Often, what makes them even more special is the fact that they are owned by big-name fashion brands. Discover which ones!

Footsteps away from the golden triangle 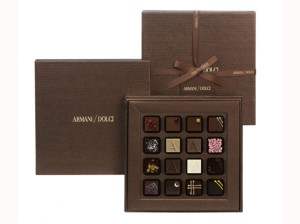 As many know, multi-talented designer Giorgio Armani has not limited himself to expressing his creativity solely in fashion. In fact, at number 31 via Manzoni, it is impossible not to notice his elegant Armani/Hotel which mirrors the minimalist style typical of the brand to perfection. Inside, you will find the Armani/Bamboo Bar and the sought-after Armani/Ristorante, which not only offers an unparalleled view over the glittering window displays of the Quadrilatero but also authentic Italian cuisine upgraded with an international twist. Standouts include the restaurant’s special menu dedicated to truffles, skillfully interpreted by the venue’s Executive Chef. Lying next door is the designer’s sophisticated Japanese restaurant Nobu Milan. Opened in 2000 and located within the Emporio Armani Store, it faces onto the peaceful and aristocratic neighborhood of via Pisoni. Chef/owner Nobu Matsuhisa draws upon his classical training from sushi bars in Tokyo and his travels around the world to bring discerning diners a whole new trend in Japanese cuisine (www.noburestaurants.com). But that’s not all! Armani’s portfolio of hospitality venues also includes the Emporio Armani Caffè (overlooking piazzetta Croce Rossa) and Armani/Dolci (via Manzoni 31), a boutique dedicated to only the finest Italian confectionery. 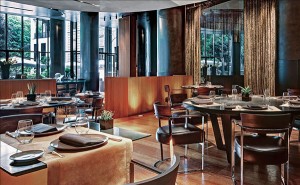 A view of the Bulgari Restaurant

A little further on…

Just a short distance from the ‘Armani neighbourhood’, Bulgari, another fashion giant, boasts one of Milan’s most luxurious five-star hotels, located in a private street between via Montenapoleone and via della Spiga. Those in search of a trendy aperitivo should make sure to head to its beautifully manicured private garden, a rejuvenating oasis of peace and relaxation set within the heart of vibrant Milan. Alternately, at its restaurant you will find a creative re-interpretation of Italian cuisine, characterized by a harmonious blend of well-balanced yet contrasting flavours, infused with a touch of divertissement and aesthetic research by its new Executive Chef Roberto Di Pinto. Also located in the centre of the city, the food space of the iconic ‘greyhound brand’ can be found at Il Ristorante Trussardi alla Scala, overlooking piazza della Scala, just footsteps away from the famed Opera House. 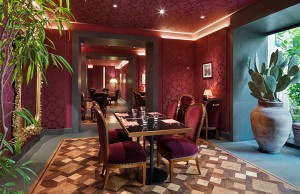 Boasting a meld of elegance, style and taste, it goes without saying that this is the perfect dining place for fashionable gourmets! The location was, in fact, chosen as the only showcase in Italy for several iconic ‘sakes’ produced by 5 Japanese companies of the ‘Japan Rice and Rice Industry Export Promotion Association’ which were not only featured on the restaurant’s wine list but also offered as an aperitivo or on a ‘by the glass’ basis. Just a little further on, in via Manzoni, we find Larte, a project inspired by Fondazione Altagamma: a café, a chocolate shop and a gourmet restaurant but also an art gallery, where customers can feast their eyes on designer furniture and artworks, all unique pieces, from Castiglioni to Molino, that can either be admired or purchased… not only a gourmet destination but also an upscale concept store. Last but not least, irreverent fashion brand Dolce & Gabbana has partnered with Martini to bring us its stunning Bar Martini and Martini Bistrot. Boasting an atmosphere reminiscent of Milanese restaurants of the ‘50s, it features Baroque details, Damask wallpaper and red velvet chairs. Above all, the Martini bistrot serves international cuisine infused with authentic Sicilian flavors that will delight even the most discerning palates. (corso Venezia 15).

Locations in via Montenapoleone 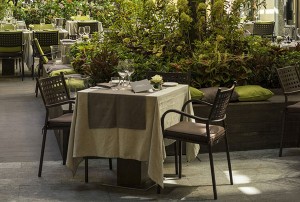 Two taste locations opened their doors in the heart of the city’s glossiest fashion street. The first is Pasticceria Marchesi (Prada Group), which chose to open its outpost here, the second addition to its historic venue in corso Magenta. In addition to the traditional Marchesi selection, this shop has now enlarged its offer which nevertheless remains true to its style and impeccable quality: 38 luminous display cases lined with crystal shelves and elegant cherry wood counters accentuate its exquisite creations in an aesthetically-pleasing pastel-coloured ambience (www.pasticceriamarchesi.it). Footsteps away from Marchesi is the LVMH Moët Hennessy Louis Vuitton-owned Cova Pasticceria, another legendary city haunt. Thanks to its strategic position in the heart of the Golden Triangle, this venue is a true Milanese classic. Established as a pasticceria, it also offers a house aperitivo: an infusion of herbs and flowers based on a secret recipe. The other kid on the block (at number 19) is the Doriani Montenapoleone Cafè Restaurant, the brand’s third address in the Quadrilatero after its other two boutiques. The philosophy of this restaurant is based on a combination of gourmet cuisine and sophisticated service in a refined, relaxing atmosphere. The menus, different for lunch and dinner, are centred around colour and pay tribute to Mediterranean cuisine (www.doriani.it). 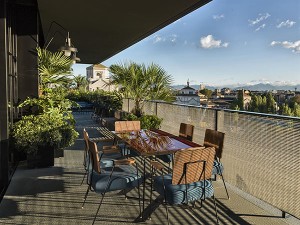 The irreverent ‘twins of fashion’ Dean and Dan Caten, the founders of Dsquared2, are the latest designers to have joined the fashion restaurant trend with their Ceresio 7 venue (which takes its name from the eponymous address). Its plus points include a spectacular view from its rooftop pool club over the futuristic Varesine complex and the UniCredit building, its glamorous interior design and, last but not least, the superb cuisine of chef Elio Sironi (find here other panoramic restaurants in Milan). In the innovative piazza Gae Aulenti The Stage is the name of the restaurant housed inside multi-experience store Replay. Here, taste after taste, diners have the impression of being on a luxury yacht: at its sushi bar, at its wine bar with champagne lounge, in its VIP room or at the counter of its Octavius Bar. Inside parco Sempione, at the foot of the Branca Tower, you will find designer Roberto Cavalli’s famous Just Cavalli, a cult address on the Milanese nightlife scene. This luxe restaurant mirrors the designer’s inimitable style with leopard-print cushions, black furnishings and crystal walls.

Where to Eat the Best Fiorentina Steaks in...