written by Where Milan 2 January 2015

The first Universal Exposition, better known as the Great Exhibition, was held in London, in 1851, at the Crystal Palace in Hyde Park. One of the key features of Universal or international Expositions is that only a part of the structures are dismantled at the end of the event, while the main ones are generally re-used and converted. Several of these installations have either become symbols of cities or national symbols, including the Eiffel Tower (Exposition Universelle of 1889, Paris), Arts and Industries Building of the Smithsonian Institution in Washington (Centennial Exposition of 1876), the Aquarium of Genoa (Expo of 1992) and the Sempione Park of Milan (Milan Expo 1906).

About Expo Milano 2015: Feeding the Planet, Energy for Life

The Universal Exposition scheduled to be held this year in Milan from 1 May to 31 October boasts several totally unique, innovative features. Not simply an exhibition but a major event that will involve numerous players focusing on one singular topic, namely Feeding the Planet, Energy for Life: 184 days, more than 140 participating countries from all over the world and a giant exhibition site, covering one million square metres, to host an expected 20 million visitors.  Based on their individual cultures and traditions, each country is asked to examine its own position and offer solutions regarding the major challenges related to the future of food.
Photo Gallery: some vistas that the Milanese and tourists alike are getting accustomed to seeing:
[slideshow_deploy id=’23737′]

A journey in discovery of tastes

Visitors involved in this one-of-a-kind experience related to the complex topic of nutrition will have a chance to take a real trip around the world in discovery of the flavours and traditions of people from across the globe. Expo Milano 2015 will be the first Exposition in history to be remembered not only for its products but, above all, for its contribution to the ongoing education and debate on nutrition, food and the planet’s resources.

The central theme “Feeding the Planet Energy for Life” encompasses five thematic routes that connect the areas and spaces within the Exhibition Site: “The Story of Mankind, stories of food”; “Feast and famine: a contemporary paradox”; “The future of food”; “Sustainable food = an equitable world”; “Taste is knowledge”. These themes are also developed through a same number of themed areas, situated close to the main entrances and other key points around the exhibition. Here visitors, both adults and children, will live a multi-sensorial and educational experiences thanks to the contributions of internationally-renowned architects. 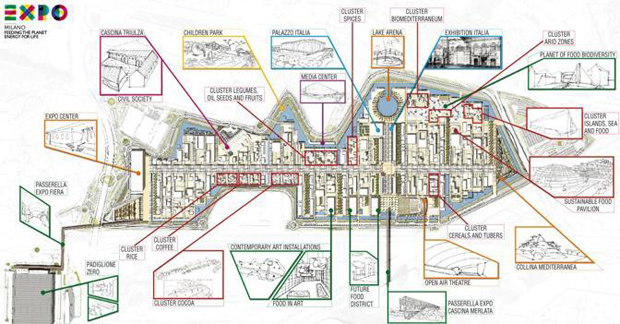 The mascot of Expo Milano 2015 embodies the key themes of the event in a positive, original and empathetic manner. Foody represent the community, diversity and food in the broadest sense of the term, a source of life and energy. For this reason, it comprises a family of eleven different elements, acting as real characters in their own right which, by being expressed as a single face, represent an ideal synergy between countries of the world.

In addition to purchasing tickets online at www.expo2015.org and through the Expo Milano 2015 Official App (the official App of the event available from the Apple Store and Google Play, developed in collaboration with Accenture), tickets can also be purchased at the Expo Gate in largo Cairoli and at the Milan Visitor Center in largo Cairoli as well as online at www.zaniviaggi.it/expo2015. Tickets are also available at the Triennale, at branches of Intesa Sanpaolo, Banking Partner of the event as well as through the online channels of authorized ticket resellers.
You can browse the various ticket options available on the www.expo2015.org portal; for tickets purchased prior to 1 May 2015, the maximum cost of a standard ticket is €32. Various price options are available according to type of visitor, length of the visit (a ticket for multi-day entry costs less than a one-day ticket) and day (depending on whether you purchase an open or fixed-date ticket). Additionally, special packages for families with children, reduced priced tickets for visitors over the age of 65, discounts for group visits and special prices for schools are also available.
[alert_box style=”white” title=””]Tickets purchased prior to the opening of Expo cost less and entitle you to a 20% discount on each visitor category.[/alert_box]

How to reach the Expo site 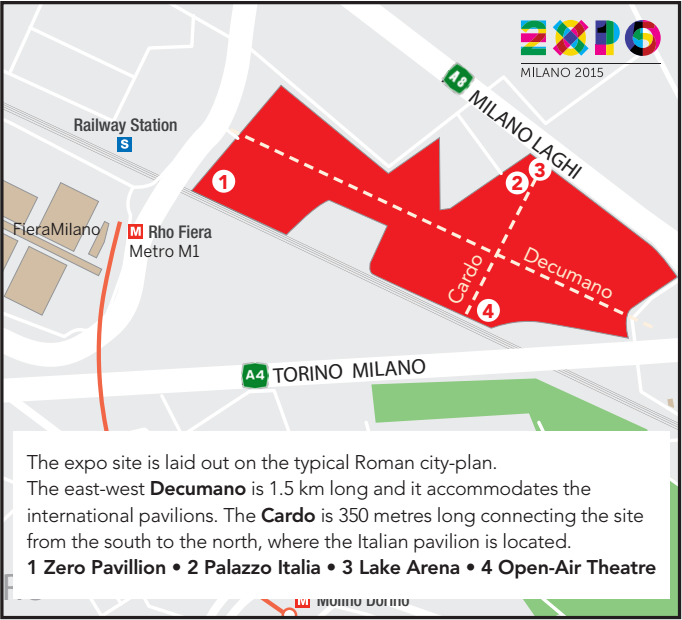 The exposition site is a few kilometers from the center of Milan, in an area directly connected by the three main city airports and by principal public transport lines.
The underground metro, Linea 1 (red), connects the central city network system with the Expo entrance (M1 red line, stop “Rho-Fiera,” Expo access “Ovest Fiorenza”) and two car parks at the Molino Dorino and Fiera metro stations (click to learn more on the underground system).
Three main highways are connected to the Expo: the A4 Turin-Milan-Venice, the A8/A9 Milan-ComoChiasso and the Milan-Varese; as well as the ring-road (Tangenziale Ovest) that joins the A1 motorway connecting Milan to Florence, Rome and Naples (click to check the traffic in real time).
Train system: the new Expo railway station “Rho Fiera EXPO Milano 2015” is at the west side of the Exposition site. It will be one of the main stops of high-speed trains from the Italian companies Trenitalia (national, suburban and regional trains) and Italotreno, .
Lastly, to actively contribute to the re-launch of tourism in the area in collaboration with local institutional associations for Expo Milano 2015, ‘Explora’, a company founded by the Regione Lombardia, the Chamber of Commerce and Expo 2015 Spa, has been set up in Milan.

>> Expo Milan 2015: live again the experience, browse the articles in our Expo section

Expo in Città Programme for Summer 2016