Design capital Milan has several fixed points, real museums that can be visited year-round which often renew their exhibits to coincide with the opening of Design Week. 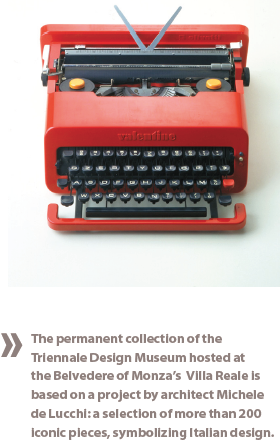 The first must-visit ‘temple’, a truly integral part of the urban fabric, is the Triennale Design Museum in viale Alemagna (main photo: the Garden, photo by Lanoche). Its new and 8th edition will debut on 9 April,2015, at the same time as the opening of the Salone, and will run until 21 February 2016. Entitled ‘Kitchens & Invaders’ it tells of the gradual and inexorable mutation of electrical appliances and kitchen utensils into machines and robots that have invaded our homes and changed our habits forever.
During the same period, the Triennale will also host the only thematic pavilion of Expo located in the centre of the city: entitled ‘Arts & Foods – Rituals since 1851’ , the pavilion has been inaugurated on 9 April, 2015. Scheduled to close on 31 October 2015, it explores the multi-faceted relationship between design and food from the first World Fair in London to the present time.

2. Museum of Italian Design at Villa Reale in Monza

In addition, December 2014 saw the out-of-town opening of a permanent Museum of Italian Design at the Belvedere of Villa Reale in Monza featuring must-see pieces by Giò Ponti, Piero Fornasetti and Bruno Munari as well as works by young, emerging designers.

Dear Readers,
even in October, Where Milan has decided to keep providing you with all the necessary information on the city, hoping that we’ll be able to meet you again as soon as possible.