Discovering Lugano’s museums, its history and culture [70Km from Milan]

Just 70 kilometres from Milan, Lugano and its surroundings in Switzerland will surprise you with several museums showcasing an extraordinary selection of works of art.

The little museum dedicated to the German writer Hermann Hesse in Montagnola, above Lugano, is one of the most visited in Ticino. A permanent exhibit set up in the halls of the Torre Camuzzi, adjacent to the Nobel Prize winner‘s first home, introduces us to the forty years that Hesse spent in the South of the Alps from 1919. In the calm of the serene enchantment of this region the author of “Siddharta” certainly found the peace he always sought and that allowed him to bring to life some masterpieces that are today – half a century after his death – some of the most widely read and appreciated books in the world. Collected are objects and works of this author, one of the most widely read in the world: famous are his glasses, the typewriter and the delicate watercolours.
An excellent audioguide in Italian and German accompanies the visitor through the pleasant landscapes of the Collina d’oro (Golden Hill), dear to the writer, the “homeland of the soul”. The permanent exhibit gives the visitor the possibility to discover the author’s different phases of activity in depth, for example fundamental topics such as India or the creation of the work “The Glass Bead Game”.
Thanks to the dynamic director Regina Bucher and to the Hermann Hesse Foundation of Montagnola, the museum has become a lively meeting point for a vast international public. Every year a large program is organized, offering temporary exhibits, conferences, concerts, films, walks and weekly readings in Italian and German. A literary café was opened in the vicinity of the museum where you can find some of Hermann Hesse’s main works (see the main picture).

The Museo delle Culture (Museum of Cultures) in Lugano presents an art collection of civilizations of the Far East, India, South-East Asia and Oceania. The core of the collections consists of works donated by Ticino artist Serge Brignoni (1903-2002). Fascinated by the world of “secret affinities”, he nurtured a passion for the arts of the southern seas and explored the figurative languages of simple cultures. He collected an extraordinary selection of works that have also influenced his artistic flair through personal research for abstraction between essential volumes and elementary contents. Since 2006 the Museum has expanded the core of 660 original works to over 8,000, coming from different loans or donations. The permanent exhibit is set up on the first and second floor. The course of the exhibit was conceived as an imaginary geo-cultural trip through the main areas documented by the museum’s collection. In addition, for each hall the visitor is encouraged to observe the works from four distinct levels of interpretation in order to allow a moment to reflect about the subjects of travel, of ethos, of anthropological relevance connected to a vision of the world of the cultures in question and, finally, of artistic style. 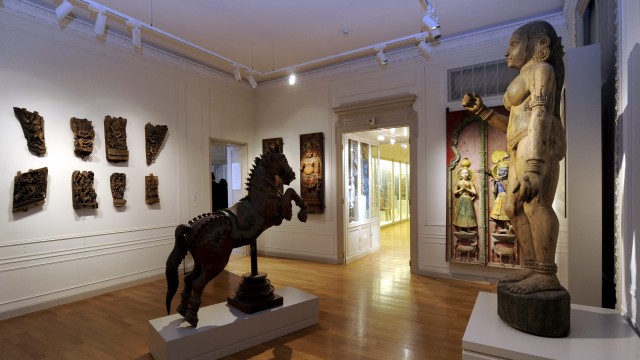 The Pinacoteca cantonale Giovanni Züst (Züst Gallery) of Rancate, close to Mendrisio, gathers works of artists that were active in Ticino from the 17th to the 19th century. The apex of the collection consists of a trio of Caravaggio-style works by Ascona artist Giovanni Serodine, one of the greatest authors of 17th century Italian art. The museum also offers important works by Giuseppe Antonio Petrini of Carona, protagonist of 17th century Ticino and Lombardy art. The century that is best represented is, however, the 19th century with paintings by Antonio Rinaldi of Tremona and other important Ticino and Lombardy painters.

Christmas in Lugano [70Km from Milan]

Camparino in Galleria, the Ideal Spot for a...