Top Tips
The Best Panoramic Spas in Milan
What to do in Milan: February 2020
Where to Eat the Best Fiorentina Steaks in...
Official AC Milan Merchandising, Where to Find It
The Best Spots for Co-Working in Milan
A Guide to Sales in Italy: Best Deals,...
The Best Places for a Quick Gym Session...
The Best Locations for Dinner and Dance in...
Michelin-Starred Restaurants in Milan 2020
Where to Eat Risotto alla Milanese in Milan
Out of Town 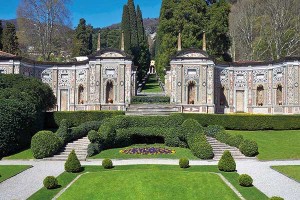 One of the historic villas in Cernobbio

Discover deep, sparkling waters, age-old parks nestling on the shores of the lake, sumptuous villas and a temperate climate almost all year round. Cernobbio is the embodiment of everything that visitors look for when visiting Europe, and which they are likely to find at Lake Como.
A graceful town, considered a perfect getaway since Roman times, Lake Como is justifiably considered an Italian paradise. For centuries, Lake Como has attracted VIPs and commoners alike. On visiting Como (see our photo gallery), the British poet Percy Bysshe Shelley remarked: “This lake exceeds anything I ever beheld in beauty.” From Renaissance times, the shores of the Lake have been laced with a series of fine, aristocratic villas, both sumptuous and tranquil. Thickly wooded areas alternate with beautifully tended, majestic parks fronting the waters of the lake, with picturesque stairways and docking stations for boats. You can choose to admire all of this from the water, aboard a boat or ferry, or you can enjoy the view from the magnificent panoramic road that runs alongside the lake. The area is surrounded by many noteworthy coastal towns including Bellagio, Menaggio, Varenna and Laglio, whose housing prices have gone up thanks to the famous villa owned by George Clooney. However, among these, Cernobbio takes pride of place. Located in an enviable, sun-kissed position, Cernobbio has the honour of housing two of the lake’s most beautiful hotels, Villa d’Este and Villa Erba which, with their magnificent gardens, are two of Italy’s most sought-after venues for high-profile events. In Spring, Cernobbio hosts one of the most important and exclusive international summits, attended by renowned politicians and economists. The villas have often been chosen for film sets, or as places of inspiration, famous individuals like Alfred Hitchcock, Luchino Visconti and Maria Callas were regular guests. In days gone by, the place was a holiday destination for aristocratic families and royalty. For example, the Renaissance Villa d’Este was acquired in the 19th century by Caroline of Brunswick, Princess of Wales, who was considered a sort of olden-day Princess Diana on account of her elegance and unhappy love affairs. The villa, frequented, over the years by sultans and tsarinas, politicians and Hollywood stars, was named the best resort in the world in 2010, and was the lucky retreat of 2006 World Cup winning team Italy. Those arriving from the lake will be met by a breathtaking view. If you decide to have a sundowner at Harry’s Bar, enjoy celebrity spotting!
Cernobbio (CO)
[55 km from Milan]
From Milan: take the A9 motorway and exit at Como Nord (approximately one hour).

Gallery: the City of Como and its Beauties

Suggestions by Milano Straordinaria: the DOC Wine of...

Villa Carlotta and its Gardens, near Como –...

The Borromean Islands [95Km from Milan]