Genoa, Capital of the Liguria Region [150Km from Milan]

Since time immemorial the charm of this city of sea and hills, a crossroads of different peoples and cultures, has attracted the attention of writers, poets and singers/songwriters who have described its beauty in their verses. The walls of this old maritime republic hide remarkable traces of its glorious past (from monuments to historic workshops right up to its picturesque “carruggi”), but also bold, modern works that have made it a sort of capital of modern Italian architecture. 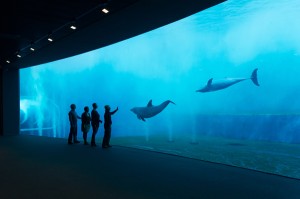 The jewel in the City’s crown is the Aquarium, the largest in Italy and the second largest in Europe after Valencia’s aquarium in Spain. Covering a surface area of as many as 9,700 sq.m, the exhibition takes visitors in discovery of the Aquarium’s 71 tanks housing an amazing array of fish and reptile species. Particularly worthy of note are its five large pools, viewable from both floors of the aquarium, housing dolphins, sharks, seals, manatees and turtles as well as countless other marine species.

>> Read more on the Aquarium of Genoa