Italian Historical Villas and Gardens [Less than 50Km from Milan]

We all know it, Milan with its over 85 museums (learn more about them on our museums section) is always forefront while talking about culture. Though, for those looking for different ways of discovering the history of the treasures just outside the city borders, the ‘Ville Gentilizie Lombarde’ circuit offers a vast array of itineraries throughout five impressive dwellings previously owned by members of the Lombard aristocracy and middle class. Guests can enjoy guided tours to every villa of the circuit thanks to young guides and volunteers for the Cultural Heritage of the Italian Touring Club, who turn each visit into a one-of-a-kind experience. 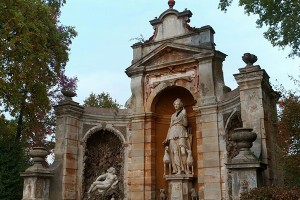 The Theatre of Diana within the park

Located just a short distance from Milan, this little architectural jewel dates back to the 17th century, when it was built by the Arconati family and features details deliberately evocative of the dwelling in Versailles. For those in search of a destination for a out of town journey, its Baroque halls are an unmissable venue. Guest can access the villa by crossing a tree-lined road of a peerless beauty followed by an imposing staircase connecting the two storeys of the dwelling. The first floor offers its visitors many interesting spots such as a spacious library, mostly known for having hosted Leonardo da Vinci’s Codex Atlanticus, the Museum Hall with its collection of statues and the study housing the statue of Gastone di Foix, general and governor of Milan in the 16th century. The second floor was instead home to its owner’s apartments, featuring a wonderful collection of paintings, stuccoes and statues that won’t deceive those in love with the art from the past. The surrounding luxuriant French gardens embellished by fountains often host important private and public events and are the ideal setting for a walk throughout nature and art.
Open Fri-Sun (from 1 May to 31 October) 10.30am-6.30pm.
Via Madonna Fametta, 1
Località Castellazzo, Bollate [15 km from Milan]
T: +39 02 8692287
www.villaarconati.it 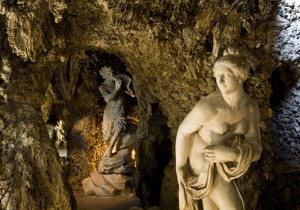 A view of the Ninfeo cave

Villa Visconti Borromeo Litta, set in Lainate, is a majestic dwelling built between the 16th and the 18th century, where different architectural styles meld into one of the most characteristic villas of Lombardy. Those who have a weakness for unconventional decorations and architectures can’t miss the Ninfeo complex. Its inner spaces symmetric rooms host many pieces from the art collection owned by the Borromeo Visconti Litta family among paintings, fossils, minerals, old coins, relics, mechanic instruments as well as archaeological finds. Though, the adjacent caves are the most characteristic details, decorated with pebble and stalactite mosaics and housing statues and fountains in their niches. The original furniture, as well a the frescoes of the 17th century are still visible on the first floor of the villa, known as one of its main attractions.
Guided tours available daily at various times from 1 May to 31 October. >> Learn more on the official website 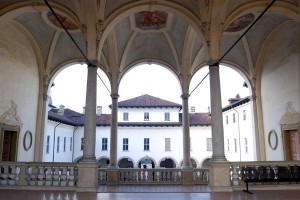 A view of the Loggia of palazzo Arese Borromeo

Though its name may recall Villa Visconti Borromeo Litta, the history of the two palazzi couldn’t be more different from each other, as well as their features. Palazzo Arese Borromeo, indeed, was built under the Spanish domination in Lombardy of the 17th century, under the commission of one of the most important characters of the time, Bartolomeo III Arese, an extraordinary expert in culture who personally selected all the works of art hosted in the villa. Its guests might be pleased to discover that, behind a deliberately simple, the dwelling features rich and elegant inner spaces boasting frescoes by the leading figures in art of that period. Getting lost in the Tempietto del Fauno, in the old stables, among the bright colours of the rooms on the first floor or its simple yet extremely elegant gardens is a pleasure for visitors of all ages. Moreover, Palazzo Arese Borromeo also hosts exhibitions, as well as public and private events.
Guided tours available every Sunday from the first Sunday of March to the last Sunday of October at 3.30pm, 4pm and 4.40pm. >> Learn more on the official website (only in Italian)
Via Borromeo, 41
Cesano Maderno [23 km from Milan] 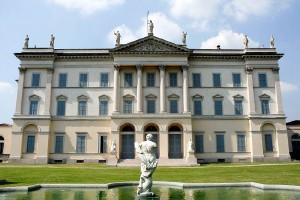 The Baroque facade of the villa

Majestic and fascinating, Villa Cusani Tittoni Traversi is one of the cornerstones of Lombard history from the late seventeenth century until the early twentieth century. Its spaces have indeed hosted the most eminent political personalities of the past centuries such as the Hapsburgs and the Bourbon families and has kept unaltered its beauty throughout the years. Here visitors can admire the vaults and rooms designed by Giuseppe Piermarini, the man behind the Scala Opera House, as well as an harmonious meld of different styles, ranging from Baroque to Romantic. Flower and nature lovers will find their ideal haven in the English garden in front of the villa. Boasting two nurseries dedicated to citrus and fruit trees, a wide wood of chestnut trees and beautifully crafted fountains, the park surrounding the palazzo charms its guests with its elegant appearance.
Open daily from 1 April to 30 September 7.30am-8pm; from 1 October to 30 March 8.30am-5.30pm.
Via Giovanni Maria Lampugnani, 66
Desio [25 km from Milan]
www.parcodelleculture.it (only in Italian) 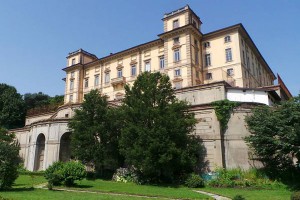 The villa seen from the garden

Born as a suburban abode in the late Middle Ages, Villa Crivelli Pusterla in its origins wasn’t particularly noteworthy for its decorations. After important renovation works carried out in the eighteenth century, the villa has acquired its current features, offering its guest the chance of visiting a beautiful Italianate garden or simply of admiring a peerless view from an upraised position. In its inner spaces, light frescoes lead visitors towards the upper floors and towards its well-known Oratorio di San Francesco, which can be accessed via an elaborated staircase. Today the dwelling is home to one of the local high schools, though it has kept its impressive features unaltered. Those visiting Villa Crivelli Pusterla can indeed still appreciate the beauty that had previously charmed eminent guests such as Napoleon Bonaparte.
The villa is visible only at particular occasions. >> Learn more on the official website (only in Italian)
Via Montegrappa, 40
Località Mombello, Limbiate [24 km from Milan]

>> Learn more about the Ville Gentilizie Lombarde circuit (only in Italian)

Church of Santa Maria in Calvenzano [26Km from...