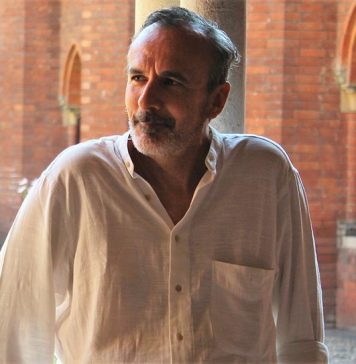 Born in Milan, he has specialised in architectural design for books and magazines since 1990. For the past decade, he has been passionate about the history of Milan and has realised a project with a pilot route for visually impaired citizens to discover the 15 most important churches in the city. He created the website yesmilano.com and the YouTube channel Andrea Rui where he tells the history of Milan with a focus on urban planning, architecture and art.

Specialising in architectural drawings for books and magazines, including “Bell’Italia”, “Carnet”, “Spazio Casa” and “Home”, Andrea Rui collaborates on the “Mirabilia Italiae” series (Franco Cosimo Panini Editore). He has published the illustrated books “Venezia, 15 campanili” and “15 campanili d’Italia” for Vianello Editore in Treviso and with the association “Lettura Agevolata” he has realised the project “Le chiese di Milano in tutti i sensi” (Milan’s churches in all senses), a pilot route for visually impaired citizens to discover the 15 most important churches in the city.

Passionate about the history of Milan, in his YouTube channel ‘Andrea Rui’ (linked to the website yesmilano.com) Rui tells the history of the city with a focus on urban planning, architecture and art. His videos feature careful iconographic research and often contain original illustrations created by the author thanks to the skills he has acquired over the years in publishing and popularisation. Convinced that only culture and beauty can save the world, his videos are a reminder to remember history and safeguard the urban environment. He edited the book “I Navigli a colori, con le fotografie di André Leroi fotografo virtuale nella Milano tra il XIX e il XX secolo” where he recoloured old black and white images. In his latest project “Alla ricerca della Milano perduta” (In search of the lost Milan), he rediscovered the city of the past by reconstructing 15 places in the city with 360° images that he assembled into a single image. His passion for the city and for papermaking has led him in parallel to create a limited production of pictures and gadgets featuring the city’s most iconic places and the history of its means of transport.

TIPS ABOUT MILAN (with video contributions)

“My route starts from Via Torino, one of the city’s most important commercial arteries, and takes you on a discovery of what was once the “citadel” of Milan, today’s Ticinese district. Starting from Via Orefici, we head towards the Carrobbio and, along the way, we encounter two churches that are definitely worth a visit: Santa Maria presso San Satiro and San Giorgio a Palazzo. In the video on San Giorgio I also talk about the archaeological remains of the Roman Imperial Palace that occupied that part of the city and the ancient tower that flanked the gate that opened in the ancient walls and still survives at the Carrobbio, used as a restaurant. Interestingly, the distance between the Carrobbio and Piazza 24 Maggio corresponds exactly to the size of a centuria, i.e. 720 metres, suggesting that this area was already inhabited in Roman times and was organised around the decumanus maximus corresponding to today’s Corso di Porta Ticinese.
From the Carrobbio, devastated by the bombings of the last war, we walk along Corso di Porta Ticinese, stopping at Via Gian Giacomo Mora. Here, under the portico of a modern building, a plaque and a sculpture recall the “Storia della Colonna Infame“, one of the darkest pages of the city’s history. A few more steps and you arrive in front of the Basilica di San Lorenzo with its ancient Roman columns, one of the oldest buildings in the city whose history still remains in some ways mysterious.
Passing through the ancient Porta Ticinese, we enter what was once the medieval “Cittadella” and walking along the entire Corso we arrive in front of the Basilica di Sant’Eustorgio, where we visit the splendid Portinari Chapel. In the square in front of the basilica, on the façade of the building at No. 8, we can see a walled epigraph recalling the presence of the ancient fountain of San Barnaba in that place.
Here we finally come to the new Porta Ticinese that opened in the Spanish walls and the Darsena, today one of Milan’s nightlife hotspots, but until the early post-war period one of Italy’s major ports for goods traffic.
Returning towards the centre of the city, still within what was the old “Cittadella”, walking along a stretch of Via De Amicis and entering at No. 7 where the Antiquarium Alda Levi is located, you will be able to enter the park that recreates, with its vegetation, the ancient Roman Amphitheatre.”
You can see a preview of it at minute 14 of this video, which, like the others I have linked, will help you prepare for a visit to these historic places.”