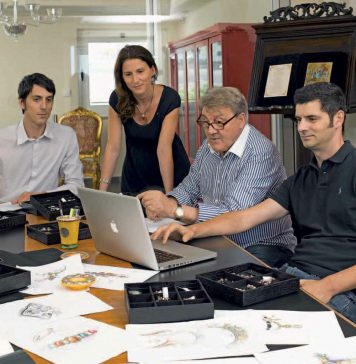 A brilliant creator of goldsmith’s art, Sacco was born in Crotone and, after a solid professional training, which was grafted onto a personal passion for the history and myths of the Mediterranean Sea, he developed his own company. He first landed in Milan as the creator of stage jewellery for operas for Maestro Zeffirelli at La Scala. In more recent years, Milan became the springboard for the expansion of the Gerardo Sacco brand abroad through the Via Manzoni boutique.

Italy’s culture is rooted in a multi-millennial history rich in myths, magic and artistic expressions of excellence. Gerardo Sacco is an excellent representative of this Italian character who bases his personal history on a deep culture and great creativity with a solid foundation. He was born in 1940 in Crotone and step by step trained in the goldsmith’s profession before opening his workshop. The big leap onto the international stage came in the 1980s when the great director Franco Zeffirelli commissioned him to make the stage jewellery for a performance of Don Carlo. From here to cinema and even television, the step is short. Maestro Gerardo became the “Goldsmith of Divas” and his jewellery can be found worn by Liz Taylor or Glenn Close, to name a few.
Today, flanked by his three children Viviana, Andrea and Antonio, he interprets contemporary style and continues to tell stories of yesterday and today.

MILAN IN THE HEART
What links Gerardo Sacco to Milan? First of all, the entrepreneurial spirit that made Milan be chosen as the base for the brand’s international expansion.
In Milan, in the historical heart of the city, Via Manzoni, he chose to open his boutique: a few steps away from La Scala where Maestro Gerardo Sacco was hired by Maestro Zeffirelli for the stage jewellery of a memorable edition of Don Carlo.

A JEWEL BOUTIQUE IN VIA MANZONI
Entering the boutique that Gerardo Sacco wanted in Via Manzoni, because of his deep connection with the Teatro alla Scala, is like entering a wunderkammer where extraordinary jewels of fine Italian craftsmanship are collected, telling stories in a contemporary interpretation.Exclusive and magnetic, they blend style with the tradition of Calabria. Man’s ingenuity and careful craftsmanship transform gold and silver into unique shapes, characterising the design.

THE INSPIRATION
Here you can admire the Mediterraneo, Mito and Magia collections, the three inspirations that nourish the creativity of Gerardo Sacco, who has always been inspired by his Italian homeland. Mediterraneo expresses a journey through the rituals and traditions of the various cultures that have succeeded one another in Calabria, home of Magna Graecia, where the sea plays a central role; Mito translates stories of passions, dreams and visions of ancient and contemporary heroes; Magia as a game to observe everyday life with a touch of irony.
The brand’s iconic jewel is the Reverse Oro, a precious wish ring that transforms with a gesture, in gold and precious stones, handmade by the team of goldsmiths led by Maestro Gerardo Sacco.