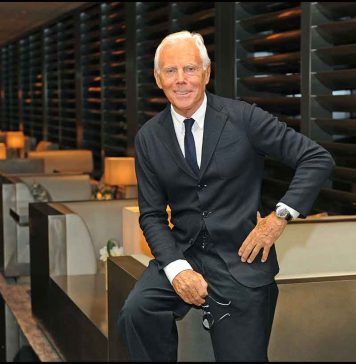 Perhaps the entrepreneur who most embodies the Milanese spirit and who has given Milan the most in terms of international notoriety, Giorgio Armani was born in 1934 in Piacenza. After moving to Milan with his family, he began his professional career as a window dresser at the Rinascente Department Store. From 1965, he worked for fashion companies and in 1975 created his own company, which spanned all fields through numerous joint ventures. A munificent patron and active sponsor of sport, he expanded his brand to every corner of the world where it became a symbol of Made in Italy. But the heart remains in Milan where the brand can be found in every corner of the city with numerous initiatives and is celebrated at the unmissable Armani/Silos museum in Via Bergognone.

Let’s start from the large billboard at the junction between Via Cusani and Via Broletto  dominating the centre of Milan, for years one of the symbols of the city. Then, we review all the shopping, tasting, cultural and hospitality venues that contribute to Milan’s style, because a number of the coolest locations carry the Armani signature.
The iconic Giorgio Armani boutique is in Via Sant’Andrea 9, in the same location where in 1983 “King Giorgio” opened his first boutique: 1200 sq.m. and four floors where the past “is woven with the future”.
The boutique expresses the Armani philosophy – one capable of transforming beauty into something both welcoming and comfortable: “a space that allows customers to experience the Giorgio Armani world to the full“, as he said.
The Armani/Casa flagship store in Corso Venezia 14, with 16 display windows showcasing the brand’s collection, is a reference point for interior décor.
A|X Armani Exchange, the brand born in 1991 in New York and always in tune with young people, in February 2022 has landed in Italy with its first store in Milan in Corso Vittorio Emanuele II. At the Armani/Manzoni31 you can find the following Armani lines: Armani/Dolci by Guido Gobino, Armani/Fiori, Emporio Armani man and woman, junior collection of Emporio Armani, EA7, Armani/Libri, Armani beauty. Emporio Armani is also available in a corner at the Rinascente department store (2nd Floor) and since 2021 inside Linate Airport (1st Floor, Building F).
As for food, Nobu Milano is the sushi restaurant offering a menu that blends traditional Japanese cuisine with Peruvian and Italian influences; the Emporio Armani Ristorante & Caffè hosts a restaurant with a luxurious champagne bar at the entrance and an outdoor dining area, the Emporio Armani Giardino.
Armani is also a hotel: 95 rooms, a haute cuisine restaurant, a luxurious SPA and magnificent panoramic views over the city are the main features of the Armani Hotel Milano.
Last but not least, the Armani/Silos exhibition space, opened in 2015, gathers over 40 years of the Armani universe, showcasing the designer’s unique aesthetic.