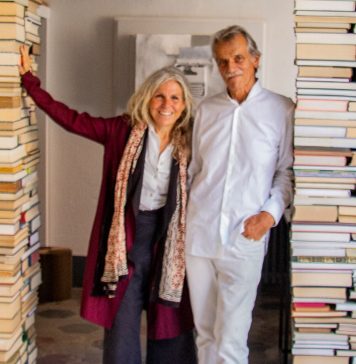 The artistic soul of the Book.
A couple representing Italian creativity from the heart of old Milan.

Lorenzo Perrone was born in Milan where he attended the painting course at the Castello Sforzesco and the Scuola del Libro dell’Umanitaria, the latter training that would mark him significantly. His professional life moved in the field of graphics and communication between Milan, London and New York. In 2000, he returned to his youthful artistic aspirations, leaving behind the shouted language of advertising for the silent language of sculpture. He starts again from the two main concepts of his training: “books”, for him a symbol of culture and salvific study, and “white” as a search for the essential. With his works, he seeks a more intimate, more spiritual relationship with himself and the ‘other’. It was during this period that he began to work on his White Books.

Simona Vanzetto was born and studied in Florence and made her professional debut in Paris where she expressed herself through costume, fashion and photography. In the 1990s she returned to Italy and Tuscany where she opened a small niche design and communication studio. Passionate about Yoga, an activist in social work, in 2006 she met Lorenzo with whom a profound partnership of life and artistic research was born to develop together the LibriBianchi project.

ABOUT LIBRIBIANCHI
The LibriBianchi are the expression of Lorenzo and Simona Perrone’s personal artistic research that has been developing for over twenty years and which explores the world of books and strongly sanctions the book/culture binomial as a synonym of civilisation.
Lorenzo and Simona use real books on which they rage with water, glue and plaster, thus obtaining a raw material on which they intervene with various apparently extraneous materials such as barbed wire, glass, stones, wood and white paint. Thus a shift of perception from the semantic to the symbolic dimension takes place: the volume is moulded and shifted towards an accentuated symbolism that transforms it into sculpture. In the end, covered in white, each book becomes an Archetype, a symbol of Culture and Knowledge, silently screaming to be read otherwise.
Since 2015, Lorenzo and Simona have expanded their production to large installations and bronze, to bring the book closer to infinite livability. Sensitive to contemporary issues, their research evolves towards social and environmental themes.Appreciated by bibliophiles and collectors, the LibriBianchi are exhibited in numerous art galleries and institutions in Italy and abroad.
Don’t miss the LibriBianchi installation at the Fuorisalone 2022.
The Studio LibriBianchi atelier is located in Via Maurizio Quadrio 25 (Monumentale district).

A TIP FROM SIMONA: THE “QUEEN OF THE GARDEN”
“I am Tuscan, moved to Milan, happily, because I love this city, it has welcomed me with open arms, but despite this, I sometimes miss the earth, the smells of mosses in winter and flowers in summer. My husband Lorenzo (Milanese by birth), who knows me well, can immediately recognise that withdrawal crisis that he reads in my eyes, so not to make me suffer, we go together to seek out the green, right close to home: a bit of earth, the scent of trees, aromatic plants, flowers. Where? We take refuge in the Brera Botanical Garden, amidst Carthusian Carnations and Royal Ferns, Mediterranean plants and species that grow in humid or arid habitats. It is a pearl of biodiversity, home to plants from all over the world, plants native to the Lombardy region, but also Irises and Water Lilies.
There we sit in a secluded spot and try to breathe in the beautiful feeling of being in Nature… almost in the countryside. Since it is then a place known by few (in fact, we recommend that you do not reveal the address of the secret garden to people who do not deserve it!), it is always very quiet and peaceful. Don’t expect to be in a park as big as the Boboli Gardens in Florence, but this “corner” of greenery is so overgrown with vegetation and special plants (more than 1,000 plant species make up the treasure trove of this green island in the centre of Milan) that you won’t need more than 2 hours to get to know it well.
When you get there, after strolling through paths, elliptical basins and flowerbeds characterised by specific microclimates for each area of the garden, in search of collections of medicinal, food, dyeing and other species, you will also find an arboretum, the stars of which are two and a half-century-old specimens of Ginkgo Biloba.
But don’t forget to pay a visit to what we call the “Queen of the Garden”! It is an old stump about 2 metres high to which a crown has been placed at the top, a poor metal headdress to shelter it from the rain. Lorenzo and I playfully tell each other that it is a beautiful Arte Povera portrait of Maria Theresa of Austria, who created the Brera Botanical Garden in 1774. It was the sovereign who decided that the garden should become a place of education for medical and pharmacy students. Following the cultural model in force in the second half of the 18th century: a place of elaboration and synthesis of different knowledge. The Botanical Garden is part of the vast area of the Brera Palace where the Art Gallery, the Braidense Library, the Lombard Institute of Science and Letters, the Academy of Fine Arts and the Astronomical Observatory are also located. If, after your visit, you liked the Botanical Garden and want to recommend it to a friend, remember to whisper it in their ear!”