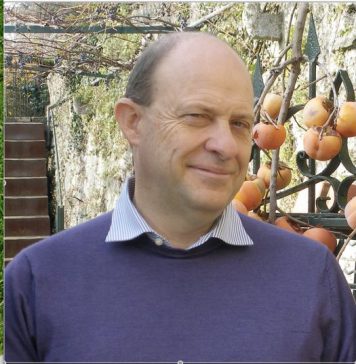 Born in Milan in 1961, he is primarily involved in cultural popularisation: he has published more than one hundred books on art history, in particular on the Renaissance and the Baroque age. He has curated exhibitions of ancient and modern art in various Italian cities. He currently holds the position of curator at the Pinacoteca Civica in Ancona and is a member of the scientific committee of the Pinacoteca di Brera. If you have the opportunity, you will really enjoy listening to the story of Leonardo da Vinci told by Zuffi with many previously unpublished details.

BACK AND FORWARD IN TIME
Milan is the second-largest city in Italy and the capital of Lombardy. Known all over the world as the capital of business, fashion and luxury, the city has always attracted million of tourists with its endless maze of shopping avenues, department stores, malls and exclusive boutiques.

The city, however, has grown on a grid traced by history and it is a fantastic entertainment for everyone as well as stunning examples of architecture from various epochs.
The city was founded by the Insubres, a Celtic people, around 400 BC. In 222 BC the Romans conquered the settlement, which was then renamed “Mediolanum” (from the Latin words “medio”, meaning “in the middle”, and “lanus”, “plain”). In 286 AD Emperor Diocleziano declared Milan the capital of Western Roman Empire, proclaiming Maximian as his co-ruler. With the Edict of Milan of 313, Emperor Constantine I guaranteed freedom of religion for Christians. In 374, Saint Ambrose became bishop of Milan. He was one of the most influential ecclesiastical figures of the 4th century. The Basilica of Sant’Ambrogio is dedicated to Ambrose, who became saint and patron of Milan. After four centuries of wars, in 774 Milan surrendered to the Franks and to Charlemagne who took the title “King of the Lombards” meanwhile that the city became a part of the Holy Roman Empire.
During the Middle Ages, Milan flourished as a commercial and banking center. Over the course of centuries, the city was alternatively dominated by the Spanish, the Austrian and the French, until finally being annexed by the new Kingdom of Italy in 1859.

During the early 1900s, Milan underwent strong industrial development, being at the forefront of the economic, social and political debate. Badly affected by the World War II devastations, and after a harsh Nazi occupation, the city became the main centre of the Italian Resistance. In post-war years, the city enjoyed a prolonged economic boom, attracting large flows of immigrants from rural Southern Italy. Over the past few decades, Milan has seen a dramatic rise in the number of international migrants.
Milan is the main industrial, commercial and financial centre of Italy and a leading global city. Its business district hosts the Italian Stock Exchange and the headquarters of the largest national banks and companies. The city is a major world fashion and design capital. Thanks to its important museums, landmarks, churches and theatres, it hosts numerous cultural institutions and universities. The city is also renowned for several international events and trade fairs, including Milano Fashion Weeks and Milano Design Week which takes place during the Salone del Mobile.Milano, the largest furniture fair in the world. Furthermore, to add to its prestige, Milan has been chosen to host the 2015 Universal Exposition.
In the years following Expo Milano 2015, Milan’s growth has remained constant and the city has increased its ability to attract visitors and tourists. Evidence of this is the new skyline and some neighbourhoods that have been redeveloped from an architectural and cultural point of view, such as Porta Nuova-Isola, CityLife district and Porta Romana, to name but a few. The renovated or just opened museums (such as the ADI Design Museum), together with the events revolving around fashion, food and design have also highlighted the excellent potential and good reputation of the Milan brand beyond its borders.
After the pandemic that has touched all areas of our society in 2020-2021, Milan is preparing to return as one of Italy’s most important tourist attractions.

MILAN AS AN ART CAPITAL
Although Italy is a treasure trove of magnificent “art cities”, few people tend to consider Milan as one of them. Milan, easily Italy’s most industrious and vital city, is also one of her most artistically important and enjoyable towns, replete with famous works of art and monuments: from the Duomo to La Scala, from Leonardo’s Cenacolo to Castello Sforzesco, from marvellous Romanesque churches to an outstanding heritage of masterpieces preserved in museums, signs of an artistic legacy that has left highly recognizable traces over a period of two millennia, right up to the recent boom of contemporary architecture.
Milan offers visitors to the city a myriad of different faces: efficiency, dynamism, a prevalently modern and often elegant urban ambience, the vibrancy of all types of initiatives, a wealth of shopping, the unrivalled quality of design and fashion products, a fantastic theatre and music scene and countless trade fair activities. Most people visiting Milan do not expect to be awed by our city’s formidable artistic heritage but rest assured, you have a once-in-a-lifetime treat lying in store for you. Its history can be traced from the fascinating era of the 4th century AD when Mediolanum was briefly the capital of the Western Roman Empire and also one of
the driving forces behind Christianity, later going on to become a Free Commune in Medieval times with the development of trade along the waters of the Navigli when the city was ruled by a succession of all-powerful families, the Viscontis and the Sforzas, bringing with them the marvels of Gothic architecture and the inspirational masterpieces of Leonardo da Vinci.
And then again, Milan is famed for its countless Renaissance and Baroque churches, the austere palaces of the aristocracy and its cloisters and hidden courtyards. The Age of Enlightenment and Napoleonic Neo-classicism in the 18th and 19th centuries made Milan one of the most enjoyable cities in Europe and a favourite haunt of international travellers.
Also worthy of particular note is its modern and contemporary architecture, from Art Noveau to building sites and works in progress. The task of testifying to the legacy of Milanese history, culture, society and traditions is entrusted, above all, to museums of the calibre of the Brera Art Gallery, the Pinacoteca Ambrosiana, the Poldi Pezzoli Museum, the Museo del Novecento and many others besides. Few cities are able to offer such a diverse cultural landscape, serving as proof of the fact that Milan has known how to lovingly cultivate and preserve the signs of its past as a capital of culture and its role in history and international art.

A TIP FOR THOSE VISITING MY CITY: THE INCORONATA LIBRARY
According to a tenacious saying, Milan is a city of inconspicuous “hidden” treasures that may escape the notice of the hurried tourist. Inconspicuous facades can hide enchanting inner gardens, magnificent courtyards, “secret” works of art. In fact, it really is a bit like that: I am thinking, for example, of one of the most striking frescoed churches, San Maurizio, which shyly overlooks the crowded Corso Magenta with a modest exterior that can really go unnoticed. Instead.
In this sense, I would like to recommend a very special place. We are along Corso Garibaldi: one of the liveliest streets of Milan’s “movida”, leading from the city centre to one of the most effervescent places of contemporary architecture, the complex around Piazza Gae Aulenti, with César Pelli’s spire-like skyscraper that has become one of the most recognisable silhouettes of Milan’s new skyline. Well, along Corso Garibaldi is the silent red-brick church of the Incoronata, commissioned just after the mid-15th century by the dukes Francesco Sforza and Bianca Maria Visconti (which is why the façade is “double”, like a married couple). It is a typical building of the Sforza era, in the transition between Gothic and Renaissance. And it also preserves some good sculptures and paintings of the period inside. But the real jewel is hidden inside the building flanking the church on the left: the magnificent room of the Augustinian Library, an intact, perfect three-aisled room on slender columns, with traces of the decorative frescoes and diffuse luminosity. Impressive is the contrast between the suspended silence of this marvellous 15th-century hall and the liveliness of the Corso, just outside the door! It is also an example of the love for culture that runs through the entire history of Milan, from the time of Saint Ambrose onwards, and passes through wonderful libraries and archives such as the Ambrosiana, the Trivulziana inside the Castle, the Braidense in Brera, the historical archive of the Ospedale Maggiore and others.