In the heart of Brera, well-known Florentine designer Angela Caputi Giuggiù presents her new exclusive collection for the spring/summer season, the ideal accessory for each and every outfit. Angela Caputi Giuggiù’s innovative, elegant jewels are the perfect addition to the wish list of every woman. For the first time, with her ‘Eliche’ and ‘Cocco’ lines, the Florentine designer has decided to introduce pastel colours into her collections.
The former is characterised by undulating shapes created in pastel colours including mint green, confetti pink and antique pink, always combined with neutrals such as black or white, making the various models fresher and more vivacious in the white or total white versions, or more elegant and seductive in the black or total black versions.
The same pastel shades, combined with either black or white, return in the ‘Cocco’ collection, where the wild crocodile-like effect of details is in stark contrast to the choice of pastel colours, including light yellow, light green and light blue, with which they have been created. 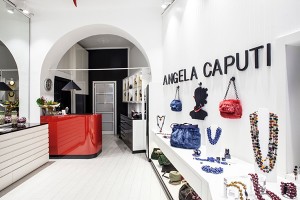 The Milanese store in via Madonnina 11

Also known by the nickname Giuggiù, the Florentine designer has become a byword across the globe. Her stunning creations have been showcased at several of the most important museums worldwide including the Metropolitan Museum in New York, the Museo degli Argenti and the Museo del Costume in Florence. For more than forty years, countless sources of inspirations have stimulated and continue to stimulate the designer including, first and foremost, her love of 20th-century American movies.
The creative heart of Angela Caputi’s bijoux is her workshop in Oltrarno, located in the picturesque district populated by Florentine artisans. Each piece is assembled by hand in full respect of tradition and the true concept of Made-in-Italy craftsmanship. The combination of typical working techniques and the use of modern materials, including synthetic resins, makes these objects authentic expressions of contemporary art.
Via Madonnina, 11
M2 (green line) Lanza
T: +39 02 86461080
External links: www.angelacaputi.com

Gallery: Brera District – the Artsy Side of...