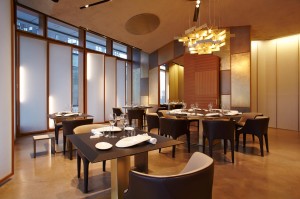 NEW OPENING – Chef Andrea Berton opened his new restaurant, Ristorante Berton, in the futuristic Porta Nuova Varesine district, the new urban project serving as an emblem of the “new metropolitan Milan”. The ultra-modern aspects of its interior, the attention to environmental sustainability, and the rigorously linear aesthetics of the buildings mirror the foundations of his minimalist, elegant cuisine. The menu is known to feature instantly recognizable ingredients where the creative choice focuses on the evolution rather than the uprooting of tradition. Dine in contemporary elegance at Ristorante Berton in Milan.