At her exclusive Milan-based boutique, the well-known Florentine designer reveals her latest creations for summer.

Angela Caputi is best known for her original design, brilliant colors and classy elegance which see her craft unique, inimitable pieces.
To welcome in summer the designer proposes a wide choice of whimsical collections. True to tradition, her “Cruise” line features fish, starfish and coral, the perfect accessories for a summer tan.

Also known by the nickname Giuggiù, the Florentine designer has become a byword across the globe. Her stunning creations have been showcased at several of the most important museums worldwide including the Metropolitan Museum in New York, the Museo degli Argenti and the Museo del Costume in Florence. 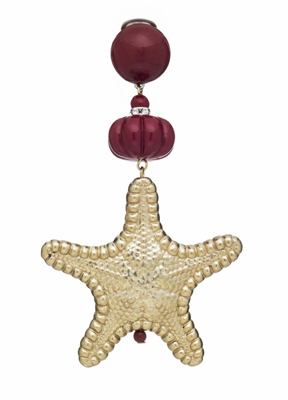 For more than forty years, countless sources of inspirations have stimulated and continue to stimulate the designer including, first and foremost, her love of 20th century American movies. In particular, Angela Caputi has a passion for “Gangster Movies” whose stage costumes have always appealed to her: elegant, brightly-colored and sparkling, in total contrast to the simple, low-key garments and settings typical of the neo-realist movement which influenced Italian cinema during that era.
The designer has revisited and upgraded her own personal concept of costume jewellery, transforming her creations into real fashion accessories and introducing Italians to a completely new genre far removed from the idea of fake jewellery. The creative heart of Angela Caputi’s bijoux is her workshop in Oltrarno, located in the picturesque district populated by Florentine artisans. Each piece is assembled by hand in full respect of tradition and the true concept of Made-in-Italy craftsmanship. The combination of typical working techniques and the use of modern materials, including synthetic resins, makes these objects authentic expressions of contemporary art.

Exclusive creations in crocodile by Giòsa

Since the very beginning, crocodile has represented a true icon of luxury. In Milan, a cult destination for these precious skins is Giòsa Milano...
Read more
Shopping

Since June 2018 Vacheron Constantin, one of the most prestigious watch manufacturers in the world, has a new home in Milan. The Maison opened...
Read more
Shopping

Precious timepieces The boutique welcomes customers into a warm, elegant atmosphere where they can savour the spirit of the Maison of Le Brassus, the oldest...
Read more