Milan Visitor Center is where our Sightseeing Milano Double-Decker Bus would depart from. Inside, I spoke with a very pleasant lady, Roberta, who kindly told me about the tour and from whom I purchased my Milan Tourist Museum Card, a three day pass that granted me access to a handful of museums for only €12!
Due to lack of sufficient time, we decided to take the shorter bus route, which included a brief historical description of the surrounding buildings, like the Castello Sforzesco, and a tour of the more modern structures of Milan, some of which included historical buildings converted into modern businesses. This seemed perfect to me because I am a bit of a history nerd, but also love learning about modern influences in large cities.
The entire tour took about an hour and a half with 14 stops, some of which included Palazzo Lombardia, the Duomo, Stazione Centrale, the Garibaldi Railway Station, Corso Buenos Aires shopping center, San Babila, Teatro alla Scala, and many more. My friend and I sat on the top deck of the bus and it was a perfect day; the sun was shining, but a breeze was present to cool us off from the hot sun. A pair of headphones was given to us prior to our departure, which provided very useful information regarding the past and the present of this very magnificent city.
As our tour continued, we passed through the fairly new skyscrapers of downtown Milan and the various shopping districts scattered around the city. 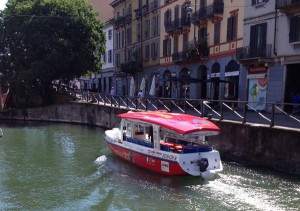 My next must-do trip: the canal cruise in the Navigli!

Some of my favorite portions of the tour were the very classical Italian music playing in between stops, of course the historical information provided, seeing Napoleon Bonaparte’s original residence with a wall of it’s original brick still in place and the Santa Maria della Grazie, a church where Mozart preformed as a teenager (there’s the history nerd I was telling you about).
I have yet to ride on the historical red bus and the take the Navigli Sightseeing Mini Cruise down Leonardo da Vinci’s famous canals of Milan, but both are on my to-do list before I part ways with my beloved Milano!

>> Read more on city sightseeing on this article

Travel and Discover Italy on a Luxury Helicopter...