Top Tips
Milan in One Day: What to Do, What...
What to do in Milan: February 2020
The Best Panoramic Spas in Milan
Where to Eat the Best Fiorentina Steaks in...
Official AC Milan Merchandising, Where to Find It
The Best Spots for Co-Working in Milan
A Guide to Sales in Italy: Best Deals,...
The Best Places for a Quick Gym Session...
The Best Locations for Dinner and Dance in...
Michelin-Starred Restaurants in Milan 2020
Sightseeing Archive

April – the Design Week: 'i Saloni' and the 'Fuorisalone'

Congratulations! Whether you’re here by chance or by choice, you’ve probably chosen the best time to visit Milan. April is the month of the “Salone del Mobile” and the “Fuorisalone”, which transform the city into an unparalleled hub of creativity

The Milanese look forward to it with eager anticipation, visitors travel from far and wide especially for the occasion: the week devoted to the “Salone del Mobile”, scheduled to be staged this year from 4 to 9 April 2017 at Fieramilano Rho, is one of the most vibrant, gratifying and exciting events in Milan. the Salone has become a mega-event that involves the city thanks to its “Fuorisalone”: a kaleidoscope of initiatives, events and proposals of all kinds – almost all free-of-charge – that transform Milan into a marvellous breeding ground of ideas.
Milan and design
The Ferrari, the Vespa, the Olivetti typewriter, the Moka coffee pot, the Campari bottle, the comics of Hugo Pratt, the buildings designed by the likes of Renzo Piano and Giò Ponti, the objects of Bruno Munari, the Frau armchair, the lamps by Flos, the Cassina chairs, the kitchenware designed by Alessi and Guzzini, the design objects of Vico Magistretti and Alessandro Mendini: we could continue ad infinitum, tracing the history of the last seventy years, because Italy’s contribution to the art of industrial design has been massive and ongoing since its inception. It is not mere chance that one of the city’s most interesting venues is the Triennale Design Museum (www.triennale.it), featuring annually changing high-profile exhibits and collections but also a permanent collection of design works. In addition to this, the city of Milan per se is a design museum, featuring entire districts devoted to design, highly active hubs of production and openair works that, over the years, have given Milan its aesthetic imprint: take, for example Gae Aulenti’s multi-coloured sculpture that dominates piazzale Cadorna or Maurizio Cattelan’s raised middle “finger”, located in front of Milan’s Stock Exchange which, following its placement, raised many an eyebrow among the financial establishment. It comes as no surprise that, at the beginning of the 1960s, the largest trade fair event dedicated to furniture was born: Currently celebrating its 56th anniversary, the event has spread its tentacles to involve the entire city.
The “Salone” at the fairgrounds
The “Salone” is held at the exhibition halls of Fiera Milano Rho (Strada Statale 33 del Sempione, M1 Milano Rho Fiera: during the “Salone”, visitors can purchase a special integrated ticket): the fair complex, designed by archistar Massimiliano Fuksas, is, per se, a striking piece of architecture. Once inside, the exhibition spaces encompass as many as 5 different shows: the Salone Internazionale del Mobile, the Salone Internazionale del Complemento d’Arredo, the Salone Satellite dedicated to designers under the age of 35, Euroluce, devoted to lighting systems, and the Salone Ufficio, dedicated to design solutions for offices and workspaces, held once every two years. During the six days of the exhibition, you can find an entire universe devoted to lifestyle solutions divided into three stylistic categories, namely Classic, Modern and Design. However, as previously mentioned, the great thing about the “Salone” is that, above all, it takes place “off-site”. For years, this mega-event has not only cultivated collaborations with institutions but also with the majority of the city’s most iconic venues. For this reason, make sure to keep your eyes peeled while strolling through the city’s most popular and widely-visited tourist districts: not far from where you are, there are bound to be strategically positioned information points.
>> check our events section

The “Salone” in the city
At laRinascente, department store, in the large underground spaces housing the Design Supermarket (a must-visit throughout the year and not only in April), a special hospitality space has been set up to provide visitors with information about the “Salone”, its services and initiatives taking place in the city. Furthermore, to highlight the link between design and culture, during the six days of the “Salone”, in the past years visitors were granted free entry to the city’s museums including the Museo del Novecento, the Museo Archeologico, the Museo di Storia Naturale, the Museums of Castello Sforzesco, Palazzo Morando, the Acquario Civico, the Galleria d’Arte Moderna and the Museo del Risorgimento. Let’s hope the initiative will be set even for the 2017 edition!
The Fuorisalone
The “Fuorisalone” is a collection of off-site events in the city that acts as a corollary to the Salone del Mobile, physically attracting a slew of visitors and virtually involving design lovers throughout the world. In other words, the one that runs from 4 to 9 April 2017, is a week-long event that places the city’s historic districts and emerging ones in the limelight, those that are already famed throughout the world but also older ones that are once again becoming fashionable, for an unmissable date that sees the melding of design, artisanship and culture, characteristics that are an inherent part of Milan and its history and which represent the hallmark traits of its image known and appreciated throughout the world. The Fuorisalone event sees the involvement of almost all the districts in the city, even though some (see the must-visit districts) are more active than others in terms of offering high-profile initiatives. The key player par excellence is design, or, more broadly speaking, creativity: installations, pop-up museums, showrooms presenting themed collections, access to places that are normally off-limits, artistic performances and celebrations of cult pieces. The choice is up to you: you can create an intensive itinerary in order not to miss even one key event (www.fuorisalone.it). Or you can simply wander around the streets in a more relaxed manner and allow yourself to be surprised by a city that has never seemed so beautiful!
>> check our events section

Furthermore, the official Salone del Mobile.Milano 2017 app will be available for downlad for iPhone, iPad and for the most popular Android devices. 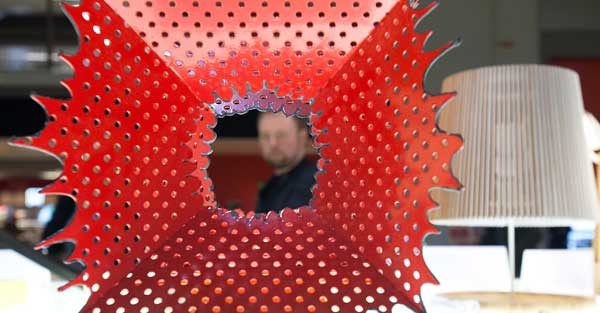 BASE Milano, the Factory of Ideas

The Best Design Hotels in Milan