Masterpieces of the Poldi Pezzoli Museum

Located just steps from Teatro alla Scala, Poldi Pezzoli is a well-loved House Museum hosting works of art donated to the City of Milan by its aristocratic founder, the Milanese collector Gian Giacomo Poldi Pezzoli (1822-1879). Acknowledged as a public museum from 1881, year of the National Exposition in Milan, today the museum serves as a backdrop for major temporary exhibitions and events, in addition to permanent collections.
The former apartments of Gian Giacomo Poldi Pezzoli, now open to the wider public, are a triumph of different architectural and decoration styles ranging from Baroque – in the bedroom-, French rocaille, Renaissance style in the beautiful “Black Room” and 14th-century style in the monumental studio.

The museum offers visitors a selection of the most amazing masterpieces of the Italian Renaissance by Botticelli, Mantegna, Piero della Francesca and Tiepolo, to mention a few of them. Gian Giacomo had the idea of transforming his apartments into a series of themed rooms based on great periods of art. Conceived to showcase paintings and furnishings, but also weapons, ceramics, glass, textiles, clocks, watches and jewellery, these rooms were specifically designed to resemble those of a modern art gallery rather than the rooms of a private home. Standouts include the Arms Room (design by Pomodoro), the Golden Room and the Clock Room.
In late November 2017, the House Museum has also been enriched by important enlargement works featuring the introduction of three new exhibition rooms set in the halls of a nearby building. 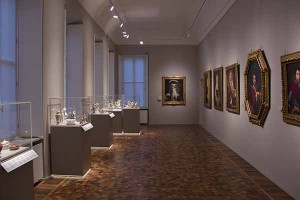 The Portrait Hall, directly connected to the main exhibition areas, hosts a collection of drawings and portraits of important characters of the local scene from the 17th and 18th century set aside with other important paintings from the same historical period. These works of art, which were previously located within the permanent collection, are intertwined by precious European porcelains from the 18th century, an important donation by local aristocrats Guido and Mariuccia Zerilli-Marimò.
Another newly inaugurated room features the so-called watches collection featuring a selection of historical pieces – all resulting from a rich private Milanese collection –  ranging from the 16th to the 20th century and providing insightful highlights on the evolution of fine watchmaking throughout the centuries. Besides hosting timepieces from the permanent collection, now considered among the richest in the world, this area is also home to temporary exhibitions.
A specific section is dedicated to archaeological finds with a specific focus of ceramics from the ancient Apulia region and dating back to the 4th and 3rd century B.C, offering a great example of the attitudes and tastes of art collectors from the 19th and 20th century.

If you speak Italian, you will enjoy this attraction at its best.

A. Lange & Söhne Opens in the Fashion...