After a major revamp, the Excelsior Hotel Gallia has reopened its doors to the public. It retains all its former refined luxury, but it now boasts a new concept and contemporary allure, where design plays a key role. 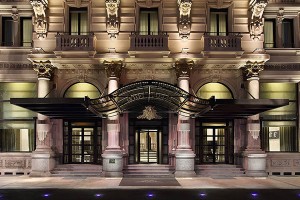 Its monumental, elegant façade, reflecting a perfect balance of decorum and sophistication, overlooks Piazza Duca d’Aosta. This is the l’Excelsior Hotel Gallia, a Luxury Collection Hotel and an icon of style and design. As evening falls, it is cloaked in an atmosphere of singular splendour, when its new, soft lighting enshrouds it in warm shades of orange. According to Marco Olivieri, General Manager of the property since 2007, the history of one of the city’s most iconic hotels is inescapably linked to that of the nearby Stazione Centrale. “In 1927, Mussolini decided to move the station from piazza della Repubblica to piazza Duca d’Aosta, and the Gallia family, owners of other hotels in Milan, decided to build the most beautiful hotel in the city next to it. They achieved this objective even before work on the station had been completed. The hotel was officially opened in 1932. At that time, an Excelsior hotel already existed, but when its owner saw the new structure, he decided to give the Gallia family the option of using the name Excelsior, which in Italy, is synonymous with luxury.” 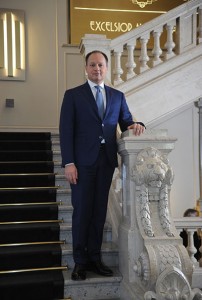 Luxury has always been the hallmark feature of the various spaces in the hotel which, following a major revamp, reopened its doors with a contemporary, highly sought-after look. “Katara Hospitality, the current owner of the property, wanted an Italian project for the restructuring. Hence, its decision to entrust the renovation of the property to the award-winning Milan-based Studio Marco Piva, which designed and supervised every detail of the project. Although its historic façade was maintained intact, its interiors were completely renovated, with a new stylistic concept, different lighting and several additional highlights, including a spa and a terrace on the top floor, which further increase the appeal of the Excelsior Hotel Gallia.” explains Olivieri, whose words are echoed by Michela De Biaggi, Room Division and Spa Manager. “The interiors were created using strictly Made-in-Italy materials, a true reflection of the Milanese lifestyle. The furnishings, many of which were custom-designed, were created by top Italian brands, including Cassina, B&B and Poltrone Frau with, however, several references to the timeless elegance of the hotel’s original Belle Epoque architectural style: a perfect marriage of contemporary aesthetics and design details.” 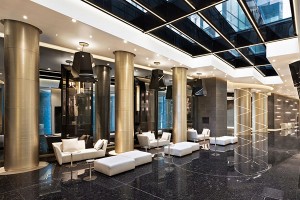 The lobby of Excelsior Hotel Gallia

One such example is the spacious lobby, embellished by a dramatic glass installation that will literally blow your mind. Fixed above the hotel’s original grand staircase, this 25-metre showstopper cascades seven story’s down like a lit-up waterfall. “The Art Deco Murano glass chandelier created by De Majo is one of the features most widely photographed and posted on social networks by our guests, 40% of whom are Italians, followed by Americans, Arabs, Chinese and Indians,” says Maurizio Busani, the Gallia’s Head Concierge, who heads a staff of ten people, including doormen. 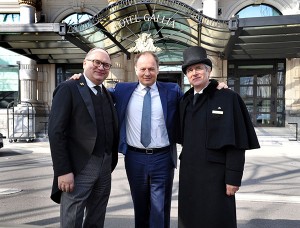 And while the interiors are the object of posts and selfies, the quality of service and the human aspect are among the pluses of the hotel. “Attention to human relationships and the welcoming attitude of our staff, combined with services on offer that really ‘make the difference’’ are the hotel’s points of pride,” says its General Manager. “For example, we offer guests a complimentary chauffeur-driven Maserati service to take them downtown (we are staunch supporters of Made-in-Italy). When they’ve finished shopping, they only need to send us an sms in order to be picked up and taken back to the hotel.”

Rooms for all Tastes 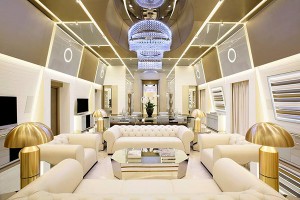 Following the renovation, the Excelsior Gallia now features 235 luxurious rooms and suites, including the opulent, 1,000 sq.m Katara Royal Suite, one of the largest Presidential Suites in Italy. Situated on the seventh floor of the building, the Katara Suite offers the epitome of luxury with four bedrooms, a private spa with a sauna and whirlpool, and two terraces offering a spectacular view over the city. It’s the ideal option for rock stars, football players and Arab princes. “The rack rate is 20,000 euros per night,” explains De Biaggi, “but this includes several exclusive services such as the availability of a Maserati 24 hours a day, transfers to and from the airport, and the services of a butler, whose duties include unpacking and packing our guests’ suitcases.”
Another stunning and exclusive option is the Gallia Presidential Suite. This suite, whose ambience is reminiscent of a private home, features two bedrooms, luxury finishes and a magnificent loggia with columns and statues. Among the ‘more affordable’ suites, the five Signature suites are particularly noteworthy. Each suite is dedicated to a renowned Milanese designer, including Achille Castiglioni and Vico Magistretti, and is decorated with bespoke Milanese furniture.
In addition, there are the six splendid Panoramic Suites, featuring large glass windows offering an 180-degree over the city, including an unobstructed view of the neighbouring station’s impressive Fascist-era façade and Giò Ponti’s Pirellone. “These are amongst the most sought-after because they are truly unique, with standout features including a decorative panel separating the living area from the bedroom,” concludes De Biaggi.
Finally, the Executive Suites are the perfect choice for both business travellers and fitness addicts. Inspired by Milanese lofts, they all feature next generation Technogym equipment or Turkish baths and chromotherapy treatments. 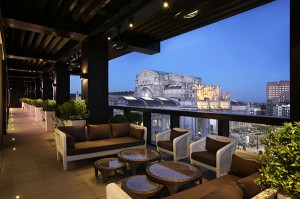 Whether you choose the bar and restaurant on the top floor, on the panoramic terrace, or the spaces situated on the ground floor, the culinary offerings are always of the highest quality, beginning with the hearty breakfasts, served at the Gallia restaurant. The restaurant is also an ideal location for events and banquets and is characterised by a lavish buffet, featuring 15 types of bread, homemade cakes, smoothies and a live egg station manned by a chef.
The elegant bar, also located on the ground floor, welcomes businessmen for quick lunches or private coffee breaks. “Fifty percent of its clientele are outside guests. “Since its inception, the Gallia has always been patronised by agents of the Italian football transfer market who come here to ‘buy’ or ‘sell’ footballers, while seated at the bar or in the lounge,” says Stefano Piantanida, the hotel’s Food & Beverage Manager.
The Food & Beverage division employs 90 people (30 of whom are chefs) including Executive Chef Davide Castoldi, who says: “Our menus change on a four-monthly basis, with a preference for local, organic produce. Each restaurant has different characteristics; the lounge on the ground floor offers more traditional cuisine, as does our room service which is in great demand. 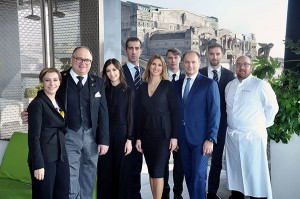 The staff of Excelsior Hotel Gallia

On the other hand, Terrazza Gallia serves a more creative, gourmet-type menu.” The Terrazza offers a unique culinary experience and is managed by the Lebano brothers, Antonio and Vincenzo, under the supervision of famous 3 Michelin starred chefs Enrico and Roberto Cerea. “Though based on Mediterranean tradition, our cuisine is designed to satisfy the metropolitan tastes of a city like Milan,” explains Vicenzo Lebano, who serves an array of highly sought-after dishes, including Sicilian red shrimp served on a bed of tomato extract and buffalo mozzarella mousse and risotto made with grilled Giarratana onions, lemons and red shrimp. Terrazza Gallia is a great spot to indulge in the hotel’s ultra-glamorous aperitivo ritual, enhanced by mouth-watering finger food, music and DJ sets. The Excelsior Gallia’s well-stocked wine cellar caters to connoisseurs with wine tasting sessions and cooking classes. 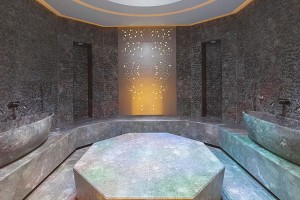 The hammam of Excelsior Hotel Gallia

In addition to the Terrazza, one of the major attractions at the ‘new’ Gallia is the Shiseido Spa, the only one in Italy certified by the renowned Japanese brand. Spread out over 1,000 square metres on the sixth and seventh floors of the hotel, it comprises five treatment rooms, a private spa, a swimming pool with a solarium, a pink Himalaya salt room, emotional showers, saunas, a Turkish bath, an ice fountain and a fitness area equipped with cutting-edge equipment, including a practical indoor golf simulator. “Guests can choose from among 30 wellness rituals based on the exclusive Qi method, a special Shiseido technique that focuses on the flow of meridians and the stimulation of tsubo pressure points. Between one treatment and the next, guests are provided with an ‘oshibori’, a small hot towel used to clean hands.
After completing their beauty rituals, guests are offered a selection of organic herbal teas accompanied by Hanatsubaki (Camelia) biscuits, which are flown in directly from the Ginza Shiseido Parlour in Tokyo,” explains De Biaggi. It goes without saying that the spa is also open to the public. “The whole hotel is open to outside guests. Our aim is to transmit a 360-degree lifestyle concept. Milanese can go to the Gallia, train, relax at the spa and then join friends for an aperitivo or dinner,” explains the Spa Manager.