The facade and staff of Klima Hotel, photo credits Casotti/Sardano

A beautiful ivy-covered wall, visible from a distance, greets guests as they arrive, announcing the concept of Klima Hotel Milano Fiere, an eco-sustainable four-star property located in a strategic position.

An independent brand since it first opened at the end of August 2012, in 2015, during Expo, the Klima Hotel Milano Fiere was one of the city’s most sought-after hotels, due to its proximity to the exposition site. After Expo, it continued to make the most of its meeting rooms, and its strategic location – the hotel is situated just minutes from the motorway, becoming a reference point for business and congress tourism in Milan. “During the six months of Expo, the average occupancy of our 175 rooms was around ninety percent. Although this figure has dropped slightly, we still boast a satisfactory seventy percent occupancy rate, with 55,000 arrivals per year excluding congress attendees,” says the Klima Hotel’s manager, Massimo Macchi, who was appointed to the position when the hotel opened in 2012. 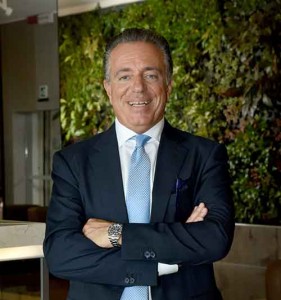 Mr. Macchi, whose resume includes work experience at 21 different hotels, brought several of his own staff members with him to help him run the hotel. “The corporate segment and Mice (the acronym for Meetings, Incentives, Conferences and Events) account respectively for 30 – 40% of our clientele, and are growing steadily thanks to our partnership with Aerogravity, which we use for team building and post-congress activities, in addition to agreements with companies in the area, congress agencies and small-medium-sized businesses with whom we have a direct relationship,” explains Marketing Manager Roberta Semino, a former event organizer. 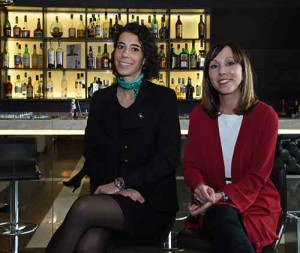 Her words are echoed by the Klima Hotel’s Sales Manager, Camilla Labate, who offers some additional details about the customers who typically use the hotel. “Our clientele is predominantly Italian and only 30% of our guests are foreigners, with Chinese and Korean groups taking the lead. The data regarding our repeat customers, who account for around 70% of the total, is also interesting. In order to make our offer more attractive, we have put together a number of appealing packages, including one that combines a room with a Spa treatment, and a ‘Cubo Dinner’, a 3-course gourmet tasting menu.”
Antonella Tuscano, the hotel’s Revenue Manager expands upon her colleague’s description of the special offers. “The high percentage of business and repeat customers is attributable to our competitive rates policy. Since ours is an independent hotel, we do not have to adhere to any specific policies or procedures, which means that we are flexible, and thus free to establish the prices of our rooms, packages, conventions and even ‘last second’ offers.” 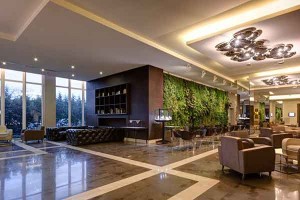 The Klima Hotel boasts six modular meeting rooms, which are specifically designed to host congresses, conferences, product launches and meetings. Each meeting room is furnished with high-tech meeting equipment and abundant natural light. The plenary room, covering an area of 305 square metres, can accommodate up to 300 delegates and is divided into two rooms with a seating capacity of respectively 80 and 130 places. Since the space is four metres high, a wide variety of décor and props can be used. “We host product launches, training courses and conventions related to the world of pharmaceuticals,” explains Events Managers Tania Prevost.
“My staff and I follow the event from A to Z, personalizing setups and décor to a maximum. Among the most unusual and memorable events held at the Klima was a product launch where we were asked to recreate a jungle in one of our rooms. Our customer asked us to fill the room with several rare species of plants and animal print details. On another occasion, we were asked to decorate the meeting rooms with lemon trees. During my tenure, we have also hosted several unique cooking shows. In addition to our six meeting rooms, the hotel is equipped with an extremely versatile panoramic terrace, used for Mice and leisure events.”
The terrace is the ideal spot for ‘aperitivi and dinners, but also for workshops catering to up to 100 participants,” says Prevosti. “During trade fairs, including, first and foremost, the ‘Salone del Mobile’ (Milan’s Furniture Fair), we use it extensively to organize lavish ‘aperitivi’ accompanied by a rich buffet,” adds Roberta Semino. 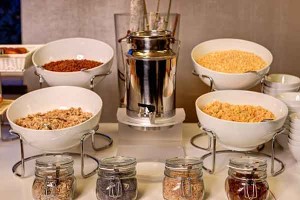 Apart from its flexible price policies and strategic position, one of the elements that contributes to the success of the complex, and the high percentage of repeat customers, is the welcoming attitude of the staff manning its Front Desk (the hotel’s visiting card and the first point of contact with guests), and the relationship that they establish with the client.
“The Klima employs six front desk clerks aged between 22 and 37 who work on a 24-hour shift basis. This is a young, savvy and, above all, flexible team, who are not afraid to make mistakes or take the initiative when it comes to solving any problem that a guest might have,” says the Klima Hotel’s Front Office Manager Niccolò Genoni. His aim, during his two-year tenure, has been to instill his front desk staff with a sense of what he refers to as, “’professional empathy’, because when guests are stressed or tired after a long day’s work, what they appreciate most is a smile.” 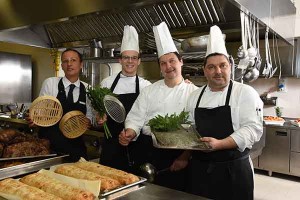 Among the repeat customers, there are ten guests who have been permanent clients at the hotel for ten years, from Monday to Friday. “Credit for their loyalty is also attributable to our staff who makes each and every guest feel at home,” explains Macchi. “This begins when each and every one of our guests is called by name. From the time that I arrive at the hotel at 7am in the morning until I leave at 8pm, I stop and talk to all of our guests, regardless of whether they are regulars or new arrivals. My job is to find out if we need to make any changes or improvements regarding their rooms, our amenities or breakfasts. Apropos breakfast, we focus on all of our customers’ needs with vegan, gluten-free and vegetarian menus. Furthermore, during peak periods, including trade fairs or events, our staff is trained to respond to our customers’ needs as quickly and efficiently as possible,” Genoni concurs, “Time is of the essence: if we call a taxi we make sure that it arrives immediately and, should the need arise, we are able to serve a three-course dinner in the space of just half an hour.”

You Can’t Get Any Greener

As its name suggests, Klima is a truly eco-sustainable hotel. Its claim to being a ‘green’ hotel is supported by a striking green, ivy-covered wall running the length of its 16 floors (a grid, located at a distance of 1.5 metres from the hotel’s wall, to which vases are attached). In addition to making a powerful visual statement, this living green wall has environmental, heat regulating and, above all, soundproofing functions. The significant reduction in noise levels has earned the hotel A+ certification from the Regione Lombardia. “We soundproofed both the communal areas and the rooms. The latter are insulated from outside noise and from the other rooms thanks to an insulating membrane on the floors and walls,” says the property’s manager Massimo Macchi. “But that’s not all. On request, we can use an ozone generator to reduce room bacteria by 99.9%. Furthermore, the 12th and 13th floors are reserved for our ‘anti-allergy’ rooms.” In addition to the greenery, the hotel uses a series of procedures to save energy and gas, plus 15 solar panels for energy production. “In summer, we even manage to sell our surplus energy” the manager proudly tells us.