NYX Milan brings a brand new concept of hospitality to the hotel industry. Resembling a contemporary art museum rather than a hotel, its spaces, decorated with impressive murals and graffiti, morph into a viby hotspot as the sun sets!

NYX and Where® Milan promote Milan

On 24 June, more than 1,000 guests, including numerous tour operators, gathered in Milan for the inauguration of the Hotel NYX Milan. To mark the occasion, its owners asked Where®Milan to publish a special issue of the magazine: a unique opportunity to promote Milan as a prime visitor destination! 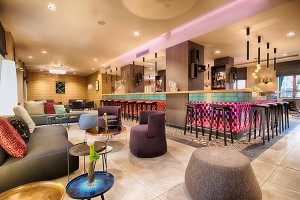 The hall of NYX Milan

Its centrally located position, just steps from Milan’s Stazione Centrale, is not the only feature that makes the brand new four-star NYX Milan a go-to destination for hip visitors. A member of the Leonardo Hotels Group and the second NYX branded property in the world after Tel Aviv, its original concept reflects the zeitgeist for which the brand is renowned.
Those choosing to stay here are attracted by the same glam, trendy atmosphere for which Milan is famous. “Nyx is the goddess of the night and NYX Milan reflects the night-loving, festive, urban and ultra-cool ambience for which the city where it is located, is famous. Here, the hotel and city are at one: an intermingling of non-stop artistic creativity both inside and out, characterized by the same vibrant atmosphere that, like Milan, makes the NYX ‘the place to be’. “It’s for aficionados of a high-quality, upbeat nightlife,” says Linda Mariotti, the hotel’s manager.

Her words are echoed by Rafi Carmon, Cluster General Manager of Italy, Austria and Hungary, who adds, “NYX Milan breaks the mould of traditional hotel hospitality by offering guests a more informal, friendly customer service and unconventional spaces. However, what makes this location truly unique is the fact that it is the first hotel in the world to have used street art as a decorative leitmotif. Iris Barak, our artistic curator, selects writers and artists whose styles reflect the NYX concept to perfection.”
Above all, people choose NYX to soak up the contemporary vibe featured in the murals and graffiti that adorn the walls and doors, and experience the irreverent sculptures and installations scattered throughout the property. “Many of the graffiti artists who decorated the hotel are members of the well-known Padua-based ‘EAD Crew’, one of Italy’s leading group of street artists which includes influential names such as Joy, Peeta, Joys and Orion. Each was given the freedom to express their creativity.

Hence, we have geometric works and works that were created free hand, highly detailed designs and others in which the boundaries are blurred,” explains Linda Mariotti. “I like thinking of this as a dynamic structure, with elements that are works in progress or in continuous evolution. You wake up in the morning to find new works that weren’t there the night before. But there’s more. Following the opening, and in addition to numerous initiatives that will involve the city and make a mark, we have also planned unforgettable parties (editor’s note: the inaugural party was a truly memorable occasion), evenings featuring live performances by well-known musicians, DJ sets and artistic ‘aperitivi’ that will include tours of the hotel’s interiors.” 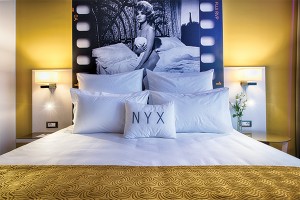 A room at NYX MIlan

It’s true that the entire hotel deserves to be visited as if it was a museum since each floor is decorated in a different way but it’s also true that each space of NYX Milan needs to be experienced to the full. These include the patio, dominated by a décor of turquoise and yellow, the bar featuring ultra-glam furnishings, including purple sofas and crystal tables, and the ‘classy, sassy’ terraces, whose contemporary Milanese skyline acts as a backdrop to cool evenings and clubbing.
And there’s more. As the day wears on, guests will have a chance to immerse themselves in a constantly evolving atmosphere. As the sun sets, the lights are dimmed and the music, which starts out with sophisticated lounge, gives way to more upbeat rhythms, transforming the communal areas of the hotel into a fashionable nightclub. “Music is one of the key elements of the NYX brand,” says Francesca Gibelli, Cluster Events Manager Leonardo Milan. 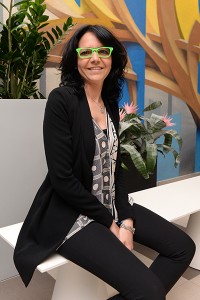 “Every evening, the Clash Lounge&Bar is infused with different sounds. We organize fabulous DJ sets three nights a week, and an ‘Out of Eden Garden Party’ every other Saturday. The latter comprises a long aperitivo accompanied by a royal buffet featuring street food plus music that continues until the small hours of the morning.
This has become one of the city’s hottest, trendiest events, attended by the coolest Milanese night owls who, amongst other things, are amazed to discover that our hotel boasts an indoor garden located in the heart of the city.” But the venue doesn’t only appeal to night lovers, it also attracts visitors who are captivated by NYX Milan’s unconventional vibe. Even business travellers are seduced by its unusual ambience. “Even our ‘meeting rooms’ are unconventional,” says Francesca Gibelli. “And although we are planning on building more ‘conventional’ meeting rooms, at present, the spaces used to organize meetings and conferences are open, interconnecting spaces which make meetings and product launches more dynamic and less static. Additionally, the patio and our two terraces on the fourth and fifth floors can be cordoned off to ensure privacy and are designed to accommodate from 70 to 500 delegates”. 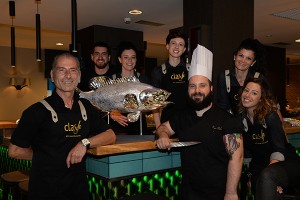 The staff of Clash restaurant

Originality, creativity and art are the leitmotif of the gastronomic offer at NYX Milan’s Clash restaurant. Though built primarily around international street food, its dishes are exquisitely presented and based on innovative culinary techniques. “Our cuisine differs both from classic hotel fare and the street food to which we are accustomed,” says Clash’s chef Mauro Molon. “Our menu features dishes that are both tasty and creative. An example? Our eggplant lollipop, a skewered version of ‘eggplant Parmigiana’ served on a stick with a turmeric sauce.”

An additional element highlighting the glamorous, irreverent style of NYX Milan are its concierge and staff. In addition to being extremely young (the average age is 25) and dressed in ultra-trendy orange jackets worn over dark T-shirts emblazoned with graffiti and paired with stylish black trousers, they are chosen (amongst other things) for their in-depth knowledge of Milan. 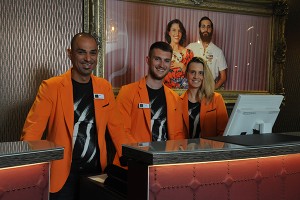 Their resumes describe them as “City Lovers”. Their job is to offer guests insider tips about the city’s best-kept secret addresses, alternative tours, hidden gems, attractions not listed in guide books, as well as night-time hotspots and events that only locals know about .”We love and know Milan inside out; we are curious and in our free time we enjoy discovering all the unique opportunities that the city has to offer,” says Davide Perna, a Front Office Agent and City Lover.”Our clientele is a mixture of business and leisure travelers. The majority are young people who are keen to experience every aspect of the hotel rather than simply viewing it as a place to sleep, so our aim is to ensure that those staying at NYX Milan have a chance to enjoy unconventional, highly immersive experiences. For example, a couple of foreign tourists wanted to attend a rave party and, thanks to personal contacts, I managed to find one that was being held that same evening, providing them with all the necessary logistic details, which are usually a secret. The two of them returned the following morning to thank me for the incredible experience.” 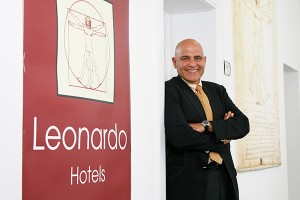 With more than 90 hotels, Leonardo Hotels (with the Leonardo Royal Hotels, Leonardo Boutique Hotels and NYX Hotels brands) is one of the core brands of the Fattal Hotels Group, the company founded by David Fattal in 1998. Leonardo Hotels operates over 130 hotels in Europe and Israel and is currently continuing its expansion. “The brand is expanding rapidly across Europe,” says Rafi Carmon, “and Italy has been earmarked as one of the most interesting countries. We plan to open ten new hotels over the next three years; although we haven’t yet decided under which brand, we have already chosen four major Italian cities as our next destinations: Milan, Venice, Rome and Florence. Preparations for the opening of our first Venice-based property are underway with the launch of the Leonardo Hotel Venice Mestre in 2019. This luxury hotel will be a located just steps from the railway station. Highlights will include 243 stylish, comfortable rooms, a scenic panoramic terrace, three meeting rooms, a bar and a gym for fitness aficionados.