The Park Hyatt Milano is one of the favourite haunts of Milanese locals, who choose it because of its international atmosphere enhanced by Italian touches and its clientele who speak all the languages of the world. And, as its General Manager confesses, “we never have a low season…” 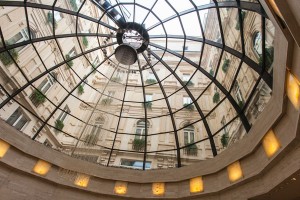 The highly central Galleria Vittorio Emanuele, which connects La Scala to the Duomo, is one of those places in Milan that has benefitted from the surge of restyling brought about by Expo. Completely freed of its age-old patina and restored to its original splendour, with its glass and steel dome and the lunettes of its aristocratic, frescoed ‘palazzi’, it has once again become the ‘good’ living room of the city. Opened in 2003, the sumptuous Park Hyatt Milano, the only hotel in Italy belonging to the extra luxury brand, a part of the American Hyatt chain, is located right here in a beautiful white historic building. “The brand is an international collection of 44 hotels, all belonging to the luxury 5-star category, all located in strategic positions and all housed in unique buildings” explains Gorka Bergareche, the Spanish General Manager of the Milanese property. Bergareche, who has run the hotel for about four years, boasts 21 years of experience in the Hyatt Group. “In New York, it took years of research before the right location was found, while in London we haven’t yet found what we are looking for.” 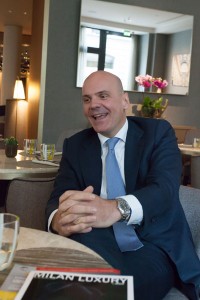 While a brand epitomizing the ultimate in luxury involves meticulous attention to detail in terms of design and the materials used, an in-depth knowledge of art (thanks to the personal passion of the Pritzker family, the founders of the brand) and top-level services, it doesn’t by any means entail rigid standards in terms of behavioural codes or the training of personnel.“ In order to allow local characteristics to emerge, the company allows each hotel to train its staff in keeping with the culture of the place” explains Bergareche. “For example, welcoming guests does not involve any rigid or ‘theatrical’ protocols but rather a relaxed, friendly attitude which, especially in countries like Italy, immediately makes guests feel as if they were a part of the local culture. In 2012, this rather unconventional approach, in direct opposition to the service imposed by most luxury hotels, earned us the prestigious Travel and Leisure World Best Service award, while, on a global level, the Hyatt was ranked 11th among the best places to work.” Furthermore, in terms of design and materials used, local influences contribute to making each Park Hyatt hotel unique and in sync with its cultural heritage. “The interior designer responsible for furnishing the Milanese hotel and giving it a warm, welcoming atmosphere is Ed Tuttle. American by birth and French by adoption, Tuttle used the services of high-end Italian artisans for the hotel’s fabrics, furniture and materials. On the other hand, we entrusted the design of our bar to the architect Flaviano Capriotti because we wanted it to have a distinctly Italian flavour. Last, but not least, the fragrances with which the various rooms of the hotel are infused were created by Laura Tonatto, the Italian nose, par excellence”, concludes Bergareche. 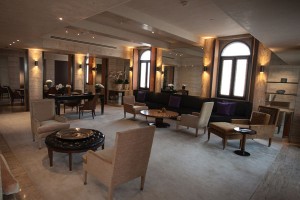 One of the suites at Park Hyatt

Contemporary style and Italian taste blend harmoniously in the hotel’s 106 guestrooms, including its 25 suites which are all located on the sixth floor. Almost all of the suites have terraces overlooking the city. These are particularly sought-after in summer, especially the ones that have a view over the Duomo or outdoor whirlpool tubs -: warm shades of tobacco, powder and chocolate are combined with exquisite details and objet d’art, while spectacular views of the city centre can be glimpsed through their windows. All rooms, regardless of their category, are spacious to ensure that guests do not feel homesick and all of them have magnificent Travertine marble bathrooms resembling private spas.
The same mood pervades the communal areas, starting from the multi-functional Cupola lobby lounge which is dominated by an impressive glass dome and a stainless steel sculpture by Anish Kapoor and continuing with the Mio Bar which, following its recent opening, instantly became one of the favourite haunts of Milanese aperitivo aficionados. Other on-site amenities include the exclusive Spa by Sisley, where guests can treat themselves to regenerating massages and highly sophisticated treatments or simply relax and enjoy a Turkish bath or a whirlpool experience.

Vun, the First Starred Restaurant at a Hotel

The Park Hyatt Milano offers an array of superlative dining and cocktail experiences which can be enjoyed in three different spaces: the gourmet Vun restaurant, the recipient of a Michelin star in 2012 (the only one Michelin-starred hotel restaurant in the city) which, in addition to being able to seat up to 32 diners also has an elegant private dining room, designed to accommodate 10 people; the aforementioned Mio Bar, the ideal spot for glamorous aperitivi or sophisticated lunches thanks to its menu which offers a choice between international cuisine (in 2008, Tyler Brulè of Monocle described its Club Sandwich as the best in the world) and traditional Italian dishes; and the Cupola, which hosts themed Sunday brunches, often based on seasonal products. 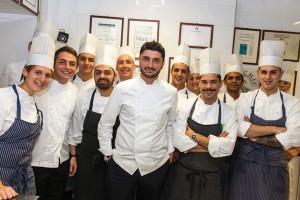 The entire food division is headed by Andrea Aprea, a young, talented chef whose curriculum is peppered with the names of starred restaurants and luxury hotels. Aprea, who coordinates a team of 34 people, explains the meaning of the restaurant’s name. “In Milanese dialect, Vun means ‘one’; I wanted to break down the barrier that is often created between the city and hotel restaurants, which are perceived as impersonal and only patronized by guests staying there; its name in dialect instantly creates a note of discord, an instinctive familiarity and an unexpected contrast, especially in view of the fact that I’m Neapolitan: this creates a link between the North and the South which is also discernible in the menu where standouts include ‘Caprese Dolce Salato’, ‘Tortello Cacio e Pepe’ and, during the season, ‘Zabaione al Marsala’ garnished with slivers of truffle; in the latter dish, the unmistakable flavour of truffle (a typical product of Central-Northern Italy) merges with the taste of Marsala, one of Sicily’s best-loved, most versatile wines. 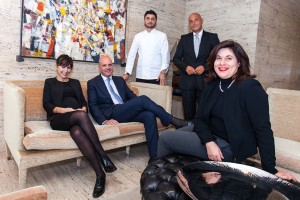 Ilaria Bucci, Gorka Bergareche and other members of the hotel staff

While it is true that, on average, Park Hyatt Milano’s typical clientele is aged between 35 and 40 and divided equally between business and leisure travelers, the majority of whom are Americans, it is also true that these guests are extremely ‘social’ and interactive. “We invest a lot in the digital world, both in terms of energy and money”, explains Ilaria Bucci, the hotel’s Marketing & Communication Manager. Although our website continues to be our main channel of communication, over the past few years, we have increased our presence on the main social networks. We have three pages on Facebook (Park Hyatt Milan, Vun and Mio) and one page on Twitter, Instagram, Pinterest and Google+. Our clientele interacts frequently with our pages. In particular, Twitter is an interesting example: many of our guests use it as a form of customer service, tweeting their requests, including, for example, asking for an extra toothbrush or booking our laundry service, through it during their stay. Always being connected and responding to requests in real time is a key priority. 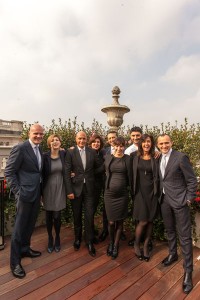 For this reason Hyatt has made its Hyatt Concierge service available to us: a Twitter account that monitors this social medium 24 hours a day. If the hotel does not respond to a client’s comment or request in a question of minutes, especially at night, the Hyatt Concierge steps in with an immediate answer. It then contacts the Reception desk at the hotel, notifying them of the request received.” Behind such a socially-driven marketing policy there are also the indications given by the attentive Director of Revenue, Carlotta Pesaresi. “Analysing numbers and sensing a need for change are key to deciding how to promote the hotel, on which markets and what room rate policies should be adopted. For example, with Expo, I started working on rates and cancellation policies in 2013 and the decision taken was based on farsightedness: a slight increase in room rates with a long-term view, a strategy that was adopted by practically all luxury 5-star hotels, means that we still have an excellent occupancy rate, in a place like Milan that has literally been transformed from a purely business destination to a city which now also attracts visitors on account of its artistic and architectural treasures.”

The Best Panoramic Spas in Milan

A New Executive Chef for Armani/Ristorante