Thanks to its central location, and because it has one of the most popular bars in town, the Hotel Straf has a well-deserved reputation for both its original, unconventional design and its trendy atmosphere.

Although its location in the heart of Milan is a major plus, the unconventional concept of its spaces, and the original, captivating interior design wins the hearts of its clientele. Key features of this unique Milanese hotel include innovative materials and those that have been creatively adapted for new uses, a profusion of installations, hints of industrial architecture mingled with traces of ‘Arte Povera’, experimentation, recycling and high-tech. 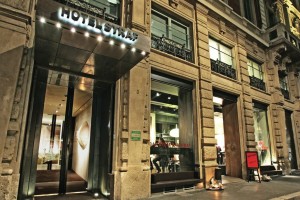 The facade of Hotel Straf

“The hotel was designed by architect, designer and stylist Vincenzo De Cotiis,” explains Carmine Ponticorvo, who, after working for 13 years at several Hilton hotels, was appointed General Manager of the facility on 4 July 2016. “De Cotiis’s three passions coexist in this project, and the result is reflected in his use of innovative materials. This is apparent in the bare cement walls – offering an almost unfinished effect, resin flooring and burnished brass, which is not only visible in the shape of design objects, but often used to cover entire walls. Other interesting features include slate, a dominant theme in several bathrooms and handcrafted gauze-effect glass, which is used as an embellishment for pillars and partitions.”  His design perspective is reflected in the coloured fabrics and leather poufs, instead of chairs and armchairs both in the hall and restaurant, steel tables and oversized works of art created by De Cotiis himself. It is, therefore, no surprise that the majority of its clientele, a mixture of leisure (60%) and business (40%)  travellers, come from the design world. As a member of the international Design Hotels™ chain, the hotel’s spaces are often featured on the cover of its directory and IED, Milan’s famous European Institute of Design, also takes its students on tours of the hotel. 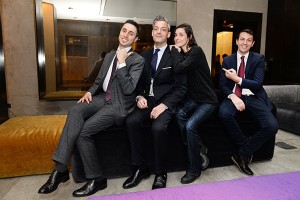 “We have a large block of people from the world of fashion and design,” explains its General Manager. “First and foremost are the Italians, followed by guests from Britain, the USA, Australia and Northern Europe. However, a fairly large slice of our target market includes visitors from emerging countries such as Brazil and China. But this is also a destination hotel for people who love a fashionable aesthetic, as well as corporate travellers. In fact, one of the reasons that the latter group chooses us is our informal and relaxed attitude. After crossing the threshold of the STRAF, visitors can take off their ties, go to the bar and interact with interesting people. It is possibly these two elements; the unique, unconventional design and our informal service, that is relaxed yet personalised, which allows us to have an average occupancy rate exceeding 80%, with an excellent performance rate on weekends.” Carmine’s words are echoed by Silvia Fondrieschi, Communications and PR Manager, who adds, “ Our target market also includes the world of finance, encompassing lawyers, consultants and financiers.  In fact, an absolutely diverse mix of clientele.”

A standard room at Hotel Straf

Although each of the 64 rooms is different, they all reflect a perfect balance between hi-tech functionality with a cool minimalist feel and a warm, sophisticated ambience. The rooms echo the innovative design of the hotel’s communal spaces, due to the presence of unique artworks and furnishings created ad hoc by De Cotiis, and the use of innovative materials, such as split slate, gauze-effect glass, bare cement and burnished brass claddings. Standouts include its Well-being rooms equipped with a crystal partition to create a relaxation area, aromatherapy and chromo therapy treatments, as well as chaise lounges featuring a built-in massage function. Those choosing the superior category have a choice of two suites (one in white stone with coloured stuccoes in various shades of red and the other in black marble with fibreglass panels) and an executive room (featuring burnished brass elements, scratched mirrors and gauze-effect glass). 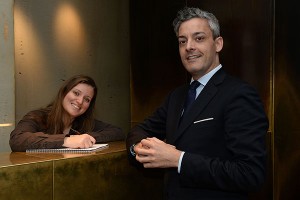 These all overlook the spires of the Duomo and are located on the top floor, which has been transformed into a mini-art gallery, featuring works of art collected by the hotel over the past decade. “Guests are often astonished when they enter the hotel,” says Manuel Lavatura, the Straf Hotel’s Front Office Manager since 2014. “Only a small percentage, mostly those who book for our central position, are confused when they see the rooms. In these instances, if we realize that their expectations were different, we send them to the Grand Hotel et de Milan, which is also run by the Bertazzoni family. Generally, we avoid giving the Russians and Americans rooms with cement walls and black bathrooms, while we know that the Japanese appreciate a more minimalist décor.” 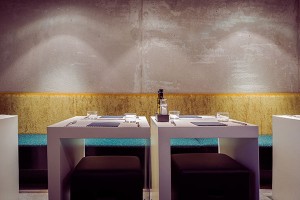 A table at STRAF Restaurant

The ambience of the STRAF restaurant, which opens onto the hall almost as if it were an extension, is also informal and unconventional. Décor features include bare cement walls decorated with two large paintings, iron and brass elements, poufs instead of chairs and minimalist table settings, enhanced by the skilful use of lighting and impeccable service. The whole is completed by its gastronomic offerings, which range from breakfasts to business lunches and sophisticated dinners.

“Our dishes are dedicated to seasonal offerings and ‘the unforgettable,’” says Matteo Rube, STRAF’s Food&Beverage Manager.
“There is a preference for local, organic produce, especially at breakfast, and a cuisine characterized by the simplicity of Italian tradition with, several exotic, fusion touches, which are reflected in a menu that changes four times a year, according to the seasons, and one, that at lunchtime features a choice of unique dishes characterized by excellent value for money and quick service.“ The meeting room is opposite the restaurant, and overlooks the hall. These three spaces can be hired for private parties hosting up to 150 guests. “In this case,” explains Rube, “the hall can be set up for a welcome drink, the restaurant can be used as a buffet space, and the meeting room, which is soundproofed, is ideal for a DJ set.” 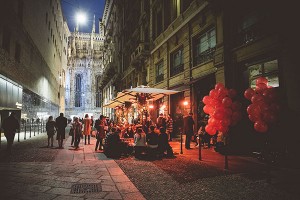 Apropos of music, it is impossible not to mention the STRAF street bar, whose address is listed in the diaries of the most glamorous Milanese, who meet here for the aperitivo ritual, attracted by its highly attentive service, the rich variety of antipasti dishes and, above all, its unique atmosphere. “Our bar is a place where our customers meet and interact,” continues Rube. “There are no fixed tables but only strategically placed stands to encourage people to mingle and socialize while listening to high-quality music. The events calendar features a rich line-up of artists, worthy of a real night spot,“ 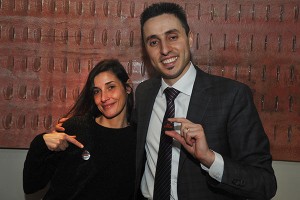 Offering an ideal combination of luxury and an informal ambience, STRAF’s staff comprises a team of people who are not asked to wear any type of formal hotel-style uniform. In addition, there is no way that a hotel as unconventional as this one is not connected to social media. “Both the hotel and bar are featured on social networks,” explains Fondrieschi. “The ones used most widely by us include Facebook and Instagram, where we regularly post information. The concept of BE STRAF is primarily associated with the bar which, since its inception, has been considered an ‘extension’ of the hotel in the city. It has given birth to a community of lovers of unconventional Italian design. The STRAF Bar is a place where you can listen to good music, where ‘being’ is more important than ‘having’, and the content trumps the packaging. #BESTRAF entails being one of ‘us’: it is the client who enlivens the place and not vice-versa. Bring on the selfies and posts, and don’t forget the hashtag!”