TownHouse Galleria: See you in the Galleria

The Galleria from the Town House Hotel

Boasting certified seven-star status and a view overlooking the Octagon of Galleria Vittorio Emanuele II, the TownHouse Galleria is unique on the international hotel scene.
When crossing the threshold of the Ottagono Lounge, the heart of the Townhouse Galleria, you have the impression of entering an ultra-sophisticated, luxurious home. With its cocoon-like atmosphere, the hotel features a tasteful blend of pastel colours, elegant furnishings and an unparalleled view over the 19th century Galleria Vittorio Emanuele II. The latter is the beating heart of Milan, recently restored to its original splendour (credit for this goes, in part, to Alessandro Rosso, the owner of the complex) and connects the Piazza Duomo to the Teatro Alla Scala, the world’s temple of opera. 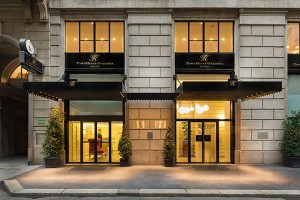 The facade of the hotel

Although the hotel is now a luxury, five-star complex, featuring 58 rooms and suites, it was assigned official seven-star status by the Geneva-based certification company SGS, when it was initially inaugurated on 7 March 2007 and only had a few suites. “Ours is Europe’s first seven-star hotel,” says lobby manager Valentino Rencurosi. “However, it is not only Europe’s first seven-star hotel but the world’s first, given that Dubai’s Burj Al Arab was never actually rated as one by an authorized body. Approximately five thousand articles were published about our seven-star status. The two additional stars – still in force for the Seven Stars Galleria, the floor housing our suites – are for our white-gloved, highly personalized service, guaranteed by the presence of a butler for each guest, and the position of our hotel inside a historic monument, which is protected by the Superintendency of Fine Arts.”

A Home Away From Home 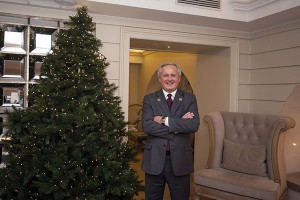 This is not just an empty claim, but a pledge made by the TownHouse Galleria to make customers feel at home, but even more pampered. “Many of our guests feel so at ease that they often come down to breakfast wearing slippers,” says Leonardo Bruscagin, the concierge. “Most of our guests are regulars, and many of them leave their personal effects with us, finding them in their rooms (most of them ask for the same room) when they return.” The hotel has an average occupancy rate of 75%, equally divided among business and leisure, the majority of the hotel’s clientele come from Arab countries (around 45-50%), followed by Russia and Europe, with Germany and Switzerland taking the lead. 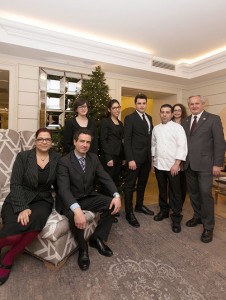 The staff of Thownhouse Galleria

It is therefore not surprising that out of the 12 suites available, there is one, the 580 m2 Presidential Suite Ottagono, that is offered at a rack rate of about €15,000 per night. All of the 12 suites have a view over the Galleria, and are communicating allowing guests the option of booking a whole floor. “They are demanding guests, who are accustomed to luxury and space,” explains Bruscagin, “And among the most unusual requests that I’ve received recently, I can’t forget the time I was asked to find 250 roses of the same colour or book a sought-after box at La Scala at the last minute. Hiring luxury cars or organizing out-of-town excursions to popular destinations that include Lake Como and Lake Maggiore, followed sometimes by Cremona or Turin, which I often suggest, especially the latter, are the order of the day. Particularly noteworthy, among the exclusive services reserved for the ‘Seven Stars’ floor, are the personalised visiting cards that await guests on their arrival at our reception desk; extremely useful items for those wishing to have their purchases from Milanese boutiques delivered directly to their hotel.”

Gourmet Offerings at All Hours

The Ottagono Lounge & Oyster Bar has a magnificent view over the frescoes of the Galleria, and, as the name suggests, over the central Octagon, which is surmounted by a glass dome. This is the kingdom of young chef Simone Ceppaglia.Pugliese by birth, Ceppaglia boasts an impressive curriculum, including experiences at several Italian and international restaurants of note which took him to Malta and the Lebanon, and also to the kitchen of renowned chef Sergio Mei. “I offer traditional gastronomy. I have no desire to corrupt Italian cuisine, and at most I add a touch of pep to my dishes with herbs, which I love. 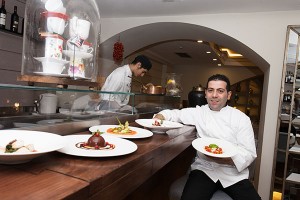 Simple dishes, when well prepared with high-quality ingredients, are the best! My spaghetti with hanging tomatoes (Editor’s note: a late variety, traditionally hung up in cellars, and having an intense, ‘mature’ flavour) is highly sought-after, at all times of the day or night,” says Ceppaglia. At lunch, in addition to an ‘a la carte’ menu and an executive lunch formula – a highly popular single course meal that includes carbohydrates, proteins and vitamins – the menu also features dishes that though more elaborate, are still deeply rooted in tradition. These include risotto with pumpkin, leeks and cream of Taleggio, octopus lightly cooked with puntarelle and bottarga, or beef cheeks braised in Nebbiolo with truffled mashed potatoes. On the other hand, pizza lovers can indulge in a wide variety of traditional and creative wood-fired pizzas at the sophisticated Dodici Gatti Grill & Pizza, boasting a magnificent terrace and a spectacular view. It goes without saying that although the kitchen at the restaurant closes at 11pm, room service is available 24/24. 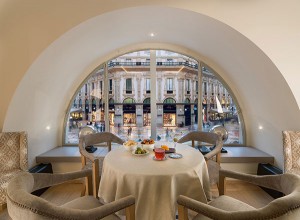 An occasion reserved for those who appreciate luxury and good food! The aperitivo hour offered daily by the Ottagono Lounge & Oyster Bar starts at 6pm. The ritual kicks off with three oysters from three different geographical areas, served with black bread, lemon, shallots, vinegar and tabasco, followed by a gin and tonic aspic that melts in your mouth. Guests are then served three highly sought-after cold cuts (Parma ham aged for 36 months, seasoned breast of duck and Felino salame), accompanied by a selection of three different cheeses – each served with a different type of pickle and a selection of different ‘taralli’: Ubriaco d’Amore all’Amarone, Caprino Varigotti with pink pepper and herbs and Tete de Moene, a Swiss-French cheese with a sweet yet intense flavour. 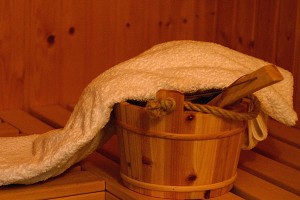 Always attentive to the needs and comfort of its guests, the hotel offers a fabulous Spa and fitness centre. Located on the top floor of the premises, with a fabulous view overlooking the spectacular roofs of the Galleria, these two offer a real oasis of peace where guests can nurture body and mind and escape from the hustle and bustle of city life. Those intent on keeping fit at the gym can request the services of a personal trainer, or indulge in a marvelous massage or a regenerating holistic treatment. The TownHouse Galleria promises guests the ultimate feel-good experience.

The advantages offered to those who choose to stay at the TownHouse Galleria are not limited to the luxury of the complex or its elite services. Guests can discover Milan from a unique perspective, the one offered by the Highline Galleria, the scenic walkway on the Galleria’s iron and glass roofs, from which they can enjoy a close-up view of the spires of the Duomo and the city’s skyline. In addition, the hotel hosts a relatively new attraction, which in the space of just a short time has become an absolute ‘must’: the fascinating Leonardo da Vinci Museum. Both attractions are free-of-charge for guests staying at the TownHouse and directly accessible from the hotel.
[slideshow_deploy id=’50518′]

Gallery: the Duomo of Milan

Christian Louboutin to Open its Beauty Store at...