Top Tips
The Best Panoramic Spas in Milan
What to do in Milan: February 2020
Where to Eat the Best Fiorentina Steaks in...
Official AC Milan Merchandising, Where to Find It
The Best Spots for Co-Working in Milan
A Guide to Sales in Italy: Best Deals,...
The Best Places for a Quick Gym Session...
The Best Locations for Dinner and Dance in...
Michelin-Starred Restaurants in Milan 2020
Where to Eat Risotto alla Milanese in Milan
Hotel News

The right mixture of luxury, a welcoming atmosphere, and its strategic business position, make The Westin Palace Milan the ideal location for business stays, private celebrations and memorable social events. 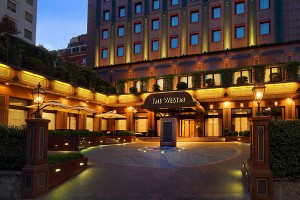 The facade of the Westin Palace Milan

The Westin is set between the monumental Stazione Centrale, the new skyscrapers that dominate the city’s skyline and the centrally located Gardens of Porta Venezia, amidst exclusive office buildings and luxury hotels, patronized by VIPs, heads of state and celebrities, in Piazza della Repubblica, the nerve centre of Milan’s business and financial district. In fact, since, its inception, the iconic five-star Westin Palace Milan, has been one of the favourite addresses of the international jet set. “The hotel,” as Francesco Brunetti, the Manager of the property and president of Assolombarda Turismo explains “was built as a hotel for kings, a neo-classical palazzo overlooking what was then known as Piazzale Fiume” (Editor’s note: now renamed Piazza Repubblica). The Grand Hotel Palace, totally rebuilt after the Second World War and re-opened in 1953, was restructured and enlarged in 1990, as part of the Ciga Hotels portfolio, and became the hotel we know today.” It subsequently became a part of The Luxury Collection brand and, in 2000, joined the Westin collection. 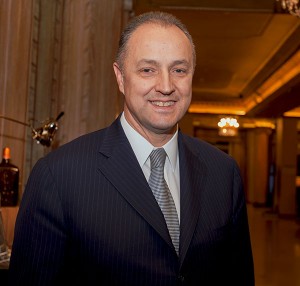 Although both the Westin Palace and the equally iconic Principe di Savoia, located across the street, belonged to Ciga Hotels (a historic Italian chain founded in Venice in 1906 and acquired by the Sheraton group in 1995), each hotel has always had its own identity and positioning. “Nowadays, one of the key characteristics of our hotel is to make guests feel welcome and at home,” explains Brunetti. “This objective has been achieved thanks to the hotel’s staff and their attitude, thus predictably making it a privileged meeting place for international travellers and locals alike.  We have a large component of businesspeople, but also numerous leisure travellers, who are attracted by the hotel’s services and the many programs that the Westin offers to families. The majority of our international guests are Americans. However, a source of pride is the large number of repeat customers, confirming that our guests enjoy staying at our hotel and returning ‘home’.” In fact, the percentage of repeat customers is a source of pride for the hotel, whose occupancy exceeds the market average by about 20 points.  “Repeat customers account for more than 50% of our guests,” explains Gianluca Iannone, the Westin’s long-term concierge, who has worked here since 2003. “Their visits usually coincide with their attendance at conventions or social events, including Monza’s Formula One Grand Prix, Milan’s fashion weeks and the Salone del Mobile (Milan’s Furniture Fair). The number of subscribers to frequent programs, including the Starwood Preferred Guest and the Marriott Rewards, is also increasing.” (Editor’s note: The Marriott group acquired Starwood in 2016, making it the largest hotel group in the world, with more than four thousand hotels divided up among thirty brands). 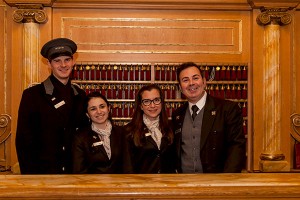 The staff of the Westin Palace Milan

As confirmed by Iannone, one of the distinguishing features of The Westin Palace Milan, is its staff’s friendly, spontaneous approach. “Our staff are a closely knit team; you almost have the impression of working in a ‘family-run’ hotel, and this is reflected in their attitude towards guests. We organise various courses dealing with the importance of always being courteous, responsive and empathetic, guaranteeing increasingly seamless interaction with our guests.
For example, if a customer is dissatisfied, we mobilise the entire staff, transforming a negative situation into an opportunity to create an unforgettable experience for the guest, who in the end will not remember the negative incident but rather the way that we managed to solve it…possibly even posting a comment about the incident and the way it was handled on a social network!”

And then, naturally, humility (“We can’t know everything, but we can make sure to gather information!”), discretion, courtesy and goodwill are the characteristics that define Westin Palace employees. “I try to stay updated about the city and our competition. Every day a new restaurant opens somewhere in Milan; so, after ending my shift at the hotel, I go in search of the city’s latest innovations. It’s important to be able to give guests advice that is not only based on my own tastes.”
When asked to recount some anecdote, Iannone tells us about the time that he was asked to find a flag for the delegation of an Asian country that had decided, at the last minute, to participate at an international summit being held at the hotel. “I called upon my network of solution providers, waking people whom I thought would be able to help me at all hours of the night: the flag in question was delivered to the hotel the next morning.”

Authenticity and Tradition at Mealtimes

One of the highlights at the Westin is the cuisine offered by PanEvo, a fabulous restaurant headed by Veneto chef Augusto Tombolato. 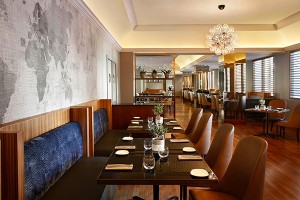 After learning the basics of regional cuisine from his mother, aged just 16, Tombolato began working on Costa cruise ships for three months of the year. The chef serves classic Italian fare that despite being upgraded with an innovative twist, is never modified. “The menu changes on a seasonal basis,” explains Tombolato, “And we only use high-quality, fresh, locally sourced ingredients. When I was a child, my parents owned a farm, meaning that from a young age, I learnt to appreciate good products. We have many foreign guests, who are keen to try typical Italian specialities including ossobuco, pasta and fish. My gnocchi are a firm favourite. Although they are always listed on the menu, they are seasoned in different ways depending on the time of the year.” Thirty percent of the lunchtime clientele are Milanese, who are attracted by the restaurant’s combo dishes (featuring a choice of vegetarian, meat, fish and gluten-free options): three courses served together and rapidly delivered to diners’ tables: “We guarantee that a dish will be served a maximum of 15 minutes after it has been ordered.”

It is not by chance that banquets, weddings and private celebrations represent a high percentage of the work executed by the kitchen staff (12 chefs, 2 pastry chefs plus additional staff who help out during the busiest times), even during the so-called ‘off’ season for these types of celebrations. “Even in November,” explains Tombolato, “Which is usually a quiet month.“ And then there are the ‘unforgettables’. Celebrities including Elton John, Zucchero and Napolitano have dined at PanEvo. “We also recently organised a private dinner at our secluded Cigni dining room for Putin, Angela Merkel, Hollande and the prime ministers of Japan and the Ukraine.”

At The Westin Palace Milan, guest wellness is based on a holistic concept that involves several aspects of their stay. In addition to its soft, ultra-comfortable Heavenly Bed, by now a distinctive feature of the entire chain, the hotel now offers a Heavenly Bath experience featuring an aloe and white tea courtesy kit (the same custom-made fragrance that pervades the hotel’s communal areas), a large, revitalizing rain shower and extra-large combed cotton bath towels. But that’s not all! 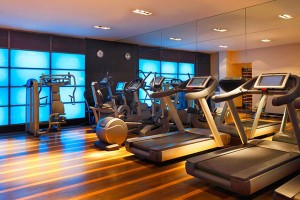 To enjoy a total relaxation experience, guests can indulge in the hotel’s in-room Spa service by booking a beauty treatment or massage directly in their room. Other on-site amenities unsurprisingly include a Spa and a gym. The Westin Workout & Beauty Space is an elegant environment, warmed by burnished shades of wengé, featuring a fitness studio equipped with all the most cutting-edge Technogym equipment (a personal trainer or a personal yoga master are available on request).
In addition, the hotel also provides outdoor enthusiasts with special maps featuring jogging or walking routes in the city. Moreover, should you have forgotten your gym kit at home, the hotel is able to come to your rescue by providing you with sportswear apparel designed by New Balance. Also particularly noteworthy are the other special initiatives organised by the hotel for its guests. For example, the Westin Personal Food Shopper is a truly unique program that enables guests to discover Italy’s finest food products, as well as several of Milan’s most authentic gastronomic boutiques. “This program is deeply connected to the essence of the Westin brand,” explains Brunetti, “And, in particular to the brand’s ‘Eat Well’ philosophy. We offer guests a tour that includes educational information about the history of local products and a series of tastings at some of Italy’s best ‘botteghe’ and wine bars. “ Another interesting program is the Westin Secret Gardens, that allows guests to discover some of the city’s most beautiful green havens, accompanied by a guide who opens the doors to several secret locations and gardens found at Milanese ‘palazzi’.