Rinascente: a Milanese Success Through 150 Years of History

We are in 1865, in a lively and full of innovations Milan. While famous architects are projecting some of the monuments destined to become symbols of Milan, among which Galleria Vittorio Emanuele II born in these years, the Bocconi brothers commit to launch a new concept shop selling packaged clothes following the Parisian Le Bon Marché example. Alle Città d’Italia was born, featuring a central position close to Piazza del Duomo and ready to become a key point for those looking for cheap clothes. But the true turning point occurs with Senatore Borletti and his brilliant intuition following the destruction of the building caused by the First World War; after taking over the Bocconi brothers’ and a neighbouring activity, he commissions the rebuilding of a variety shop offering high quality garments with affordable prices. 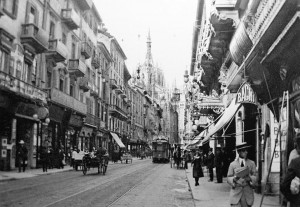 The Streets of Milan in the Early 20th Century

But how to call it? Its name is owed to Gabriele D’Annunzio’s brilliant mind, who advised it to his friend Borletti in his poem 5000 Lire, to give the idea of resilient building reviving from its ashes, similar to a phoenix.
The innovation lies in the arrangement of the garments to be sold, put for the firts time on shelves and visible from the shop windows: a brand-new way of shopping. Its success is striking; as Milan keeps enlarging, Rinascente grows, opening many stores in Italy and increasing the facilities it displays, among which a bank, a post office, a haidresser fro him and for her and a tea room with its private orchestra. The Second World War leaves the variety shop untouched, so its owner can take advantage of the booming market in the 50s to act as a springboard for never-seen-before products…the huge american refrigerators, for example, were first sold in its rooms, fueling the curious’ interest in visiting the shop. Since then, Rinascente’s ownership swifts to many entrepreneurs, among which the Fiat Group between the 60s and the 70s, years in which the shop adds little by little many entreprises in its spaces, such as furniture shops and restaurants. 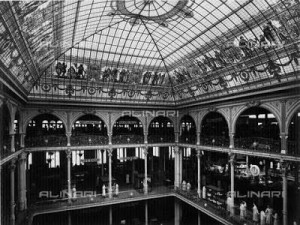 Interior of the First Rinascente Shop in Milan

Today, after 150 years of history, Rinascente group can number a network, a concept store and 11 stores in the most relevant Italian cities; its historical building in Milan now spreads over 10 storeys and features a wide range of facilities. Who has never heard about its luxury boutiques? Many of the most famous fashion brands such as Armani, Bulgari, Burberry, Dior, Dolce&Gabbana, Louis Vuitton, Miu Miu, Valentino, Yves Saint Laurent and many others chose to sell their products in its luxurious spaces where it’s also possible to buy lingerie, home interiors and design objects, as well as indulging in a beauty treatment. Not to mention the upper, panoramic storey occupied by the food court displaying typical italian restaurants, sushi bars, corners selling handmade chocolates and pralines sas well as bars offering a relaxing experience sipping a glass of the best wines; the whole with a priceless view over the Duomo’s steeples. Moreover La Rinascente currently organises cultural, recreational and musical events.
To learn more about what’s on at Rinascente check its events calendar.

A New Look for Annex Rinascente

Into the World of Oz, by Louis Vuitton...