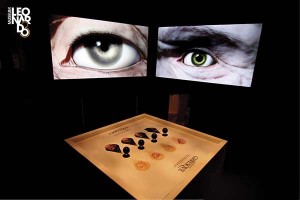 Located in the spaces of the Sala del Re, in the heart of the Galleria Vittorio Emanuele, multi-media exhibition Leonardo3 is extending its scope with the addition of new exhibits and interactive devices. To mark the fifth anniversary of the opening of the exhibition which is aiming to become a real museum – the Leonardo3 study centre has unearthed several of Leonardo da Vinci’s projects which have been studied for years but have never actually been recreated. A new gallery now hosts a series of machines illustrating the foundry processes, winches and structures that were designed for the creation of Leonardo da Vinci’s horse; a towering equestrian statue commissioned by Ludovico Sforza in the 1490s, whose complete reconstruction (a world premiere) can now be viewed by the public.
In addition to the latter, a section dedicated to cultural entertainment has enhanced the exhibition. In a new room, specially set up for the purpose, four sketches of Leonardo’s ‘Grotesque Heads’ come to life, thanks to the use of modelling techniques and 3D animation, and offer visitors a unique interactive experience.
The Leonardo3 exhibition also shows the avant-garde the technology of Leonardo’s military engineering studies in the first-ever creation of the Triple Tier Machine Gun equipped with a mechanism designed to hit a moving target at almost the same speed as a modern machine gun.
The quest to highlight the maestro’s longstanding activity as a set designer has resulted in a reproduction of his ’Ocel della Comedia’ (A Bird for a Comedy), a special model of a mechanical bird that was designed to fly across the stage and flap its wings via a mechanism that was activated as it descended down a cable. The exhibition’s collection of musical instruments has also been revamped. The focus is now on a single thematic nucleus that has been enhanced with a fully functional giant trumpet.
OPENING DAYS AND HOURS:
Mon-Sun 9.30am-10.30pm
Piazza della Scala, entrance Galleria Vittorio Emanuele II
M1 (red line) – M3 (yellow line) Duomo
Infoline T: (+39) 02 49519981
Official website: www.leonardo3.net
GPS: 45.46651, 9.18978
Find it on Google Maps
Leonardo3Multimedia exhibition
0 comment
0
FacebookTwitterGoogle +Pinterest

Build and Try the Machines at Leonardo3 Multimedia...

New Premieres for Winter 2017 at Leonardo3

Now You Can Live the Last Supper Experience,...