Home Local Tips The World of Prada, by an American Fashion Addict in Milan 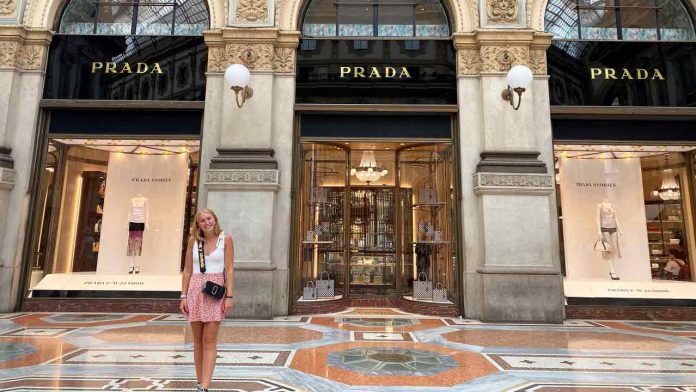 Elizabeth (Lizzie) Osterkamp, a young student from California and a fashion, travel and photography enthusiast, is fulfilling one of her dreams during her studies in Strategic Communication (University of Colorado, USA): to get to know – and be able to tell about – her experience in one of the world’s fashion cities, discovering her favourite fashion brands. Here she tells us about the world of Prada, between fashion, culture and taste.

“Coming to Milan, the fashion capital of the world, I wanted to discover the history of Prada as Italy is the birthplace of this worldwide designer brand. I found that there are many different Prada locations around Milan and decided to travel to the first ever location and flagship store that opened in 1913 at the Galleria Vittorio Emanuele II.

EXPERIENCING HISTORY AT THE ORIGINAL PRADA STORE
This two-story building, which is not evident from the outside, offers everything from handbags to accessories, a tailor service and most of the employees can speak languages other than Italian. The top floor houses mostly handbags and small accessories with most pieces located on the bottom floor.
As I came down the stairs, I noticed a beautifully painted mural of a cruise ship with couples smiling in front of the ship and Prada suitcases lining the walls. One of the staff members of Prada explained that the mural is from the first Prada store and pays homage to the original Prada brand which focused on travel and sold travel accessories like luggage. The downstairs area is filled with an array of shoes, clothes, hats, tableware, sunglasses, perfume, jewelry and more handbags. There are two special sections within the store that house silver jewelry and the Galleria handbag. They also have an area that is specific for clients who make an appointment to try on items. 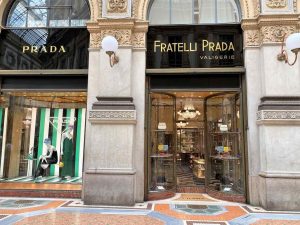 I left the store through the original door that says Fratelli Prada. This was the name used when the store first opened in 1913. If you enter through this door, the two chandeliers, the umbrella holder and the checkout desk on the left are all from the initial opening in 1913, along with the original black and white checkered floors which continued to be used when they expanded the original store. They continued to use this iconic flooring at their other stores.

ICONIC GALLERIA HOUSES PRADA MENSWEAR STORE
After shopping around at the Prada women’s store, I made my way over to the menswear store that opened diagonally in 2006. This store is one story and houses only menswear which includes clothes, jackets, shoes, hats, sunglasses, bags and perfume. They also have a display that they call “House of the Joker” where you can find poker chips, chess and many other things. The shelf below all the “House of the Joker” items displays water bottles, and below that they are selling dog accessories.

A LITTLE TASTE OF PRADA AT MARCHESI 1824 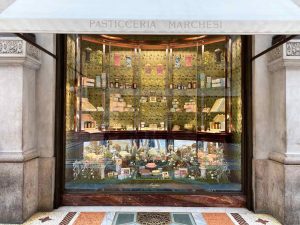 Above the menswear store is Marchesi 1824, a perfect café to stop at for a quick pastry or coffee before the stores open. Marchesi 1824 patisserie was opened in 1824 on Via Santa Maria alla Porta and is considered one of Milan’s oldest pastry shops. The original location is still open along with two other locations with one being the Galleria. 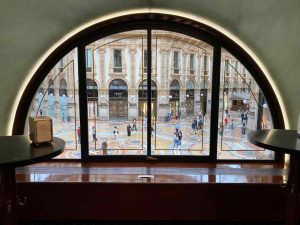 Not evident from the outside, but this café is part of the Prada group which becomes obvious when you see the Prada green walls and chairs on the inside. When I entered Marchesi 1824, I was speechless. There is a beautiful coffee bar with a range of coffee options and a pastry display with a variety of different pastries.

I ordered the crème filled croissant and a cappuccino, and I pleasantly enjoyed both. They also have gelato and sandwiches that can be eaten as an afternoon snack, and you can purchase homemade candy and chocolate that is presented in special Marchesi 1824 packaging. Enjoy your coffee and pastry at a table for a view of the Galleria from above. Look down and see the beautiful mosaic that covers the center of the Galleria and all the people who come and visit this beautiful area.

LUXURY, UPSCALE VIA MONTENAPOLEONE HOUSES TWO PRADA STORES
One week later, I visited the Prada men’s and women’s stores on Via Montenapoleone. Like the Galleria, the women’s and men’s stores are separate, but they are on the same side of the street a few doors down from each other, so it made it easy to look around in both stores. As soon as I walked in, I saw the familiar Prada black and white checkered floor. They are both two stories and offer the same items as in the Galleria stores. The women’s store had mostly handbags on the bottom floor, but when I went upstairs, I was pleasantly surprised by how big it was. The items were organized in a hallway and included more handbags, shoes, sunglasses and clothes, and they also had fitting rooms available. The men’s store also offers handbags, clothes, shoes and accessories. 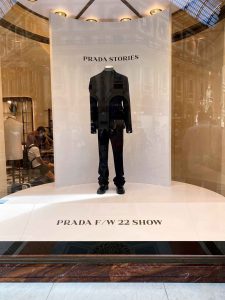 Coming back a week later to the stores within the Galleria and on Via Montenapoleone, I noticed that the window displays were different. The week prior they were displaying their new summer collection that showed off their colorful handbags, shoes, clothes and hats. The backdrop in each window corresponded with the color of the various items shown within that window along with the colors black and white. All the colors were arranged in vertical stripes and included the Prada logo. 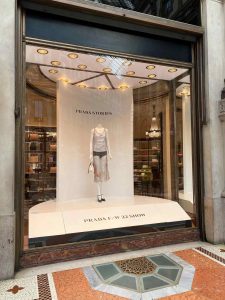 The window displays are now promoting their new women’s and men’s collections. Instead of using bright colors, the design is simple with a plain white backdrop. They include the phrase Prada Stories along the top with a label of what collection and runway show it was a part of on the bottom. The women’s collection walked in fashion week back in February of 2022, which promoted collections for fall/winter 2022. The men’s window displays use the same simple design, and they are also helping to promote their fall/winter 2022 collection. It was great to be able to see the pieces of the newest collections in person as most of the time I don’t see clothes that are worn on the runway in person. 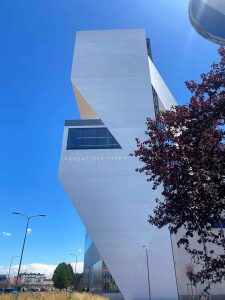 In May of 2015, Fondazione Prada opened its doors to the public. Currently, there are 11 different buildings with various exhibitions along with restaurants, a bar, cinema and bookstore. All the buildings and exhibitions are minimalistic and are filled with natural light due to the floor to ceiling windows.
I began at the permanent collection called “Atlas” within the Torre building. This building is the tallest one at Fondazione Prada standing nine stories tall and was the last building built to complete this location. I started on the first floor and made my way up to the top, stopping at each floor by taking the stairs or elevator.
Each floor only had a few different pieces of art or objects, but the views were incredible. It was a clear day, so I could see all the houses, the top of the Duomo and the Alps. This museum is different compared to other museums I have visited due to the interactive components. There is an interactive exhibition located on the top floor of the building before the terrace. I arrived at the top, and people were waiting in line to go up what looked like a staircase. However, this was not the case. People were walking into a pitch-black curved hallway with only a railing to guide them. I followed along the railing and could not see anything that was around me. 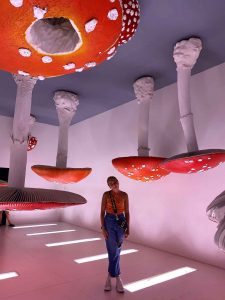 At the end of the winding hallway, was an exhibit that had mushrooms hanging upside down from the ceiling. Some of the mushrooms were spinning while others stood still. Another exhibit that caught my eye was an exhibit with four different clear boxes in the middle of the room. On the far-left side of the room, there was a piece of art that didn’t have much of a design to it, but when I got closer, I realized that the whole canvas was made up of dried out flies. The first box was a rain feature that had water coming down from the top of the box, the next two were filled with dead flies and the last box contained a person, who looked very realistic, studying something under a microscope.
After looking at all the boxes, I asked an art expert within the exhibit about this feature. She explained that this was the process of how the artist creates his fly filled canvas. She said that the two boxes in the middle collect flies, and then they are left within the box to dry out. This piece of art is different from anything I have ever seen before, and it was funny to see people’s reactions when they got closer to the large painting full of flies.
At Fondazione Prada, they regularly open temporary exhibits that last for a few months. The current exhibition that has been open since March 31, 2022 and will close on August 22, 2022, is called “Useless Bodies?”. People can make their own assumptions based on what they view, but the whole exhibition is based around “the shifting status of the human body in today’s world.” If given the chance, you should take the opportunity to admire the work and make your own assumptions on what some predict the future to look like through this art exhibit.
Osservatorio Fondazione Prada is two stories, located on the fifth and sixth floors above the men’s Prada store and Marchesi 1824 in the Galleria. Their collection of pieces compared to Fondazione Prada is smaller. The current collection, “Role Play“, put together by Melissa Harris, began on February 19, 2022 and goes until September 26 of 2022, includes works of art from different artists that used various mediums. 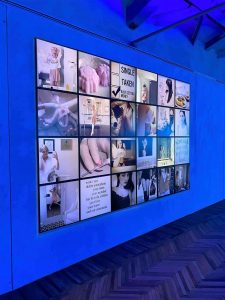 Some of the artwork is shown through videos, while others are pictures on a wall or in a display case. Each display is different, but all of them question individuality. One display that got my
attention was a look at “makeover culture.” This display used photos that were posted to social media by the artist and expresses the idea that people post photos to their social media platforms to be portrayed in a certain way in order to be liked by others. However, this is not a realistic representation of their daily life, and they are unrecognizable by the public.

A nice thing about these events is that if you buy a ticket for one museum, it gives you access to the other. The only conditions to this are that you must attend the other museum within 14 days and reserve the time and date online. When you are reserving the other ticket, make sure you choose the option about previously purchasing a ticket and enter the ticket number presented on the first ticket to avoid having to pay for both.” 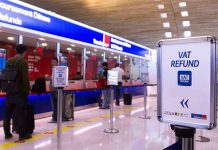 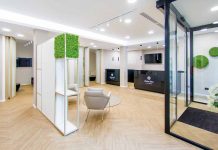 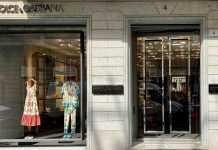 The World of Dolce&Gabbana, by an American Fashion Addict in Milan